Specifically, the average price of a liter of gasoline has fallen this week to 1,764 euros, returning to levels similar to those at the end of last October, while that of diesel has decreased to 1,876 euros, its lowest level since the week on October 10 (when it stood at 1.857 euros), according to data from the European Union Oil Bulletin collected by Europa Press.

Despite these price levels, both fuels remain far from the highs they reached this summer, when in July gasoline reached 2,141 euros and diesel 2.1 euros.

Likewise, gasoline remains below the figures from before the entry into force of the aid of 20 cents per liter that the Government approved at the end of March -1.818 euros per liter--, although in the case of diesel it continues to exceed that level -1,837 euros-- despite the latest declines.

In addition, the average price of a liter of diesel in Spain remains above that of gasoline for the fifteenth consecutive week, with a gap that this week has been cut to just over 11 cents.

This average amount of both fuels includes taxes, but does not reflect the discount that came into force since April 1 of at least 20 cents per liter, since there are higher discounts, depending on the oil company and customer promotions loyal.

Counting on this subsidy, the price of a liter of gasoline would be 1,564 euros, while that of diesel would be 1,676 euros, in both cases clearly lower than the ones it marked at the end of March, before the entry into force of the aid.

Compared to the same week a year ago and including the subsidy, the price of a liter of gasoline is 3.37% more expensive than a year ago, while in the case of diesel the price is 21.36% higher .

These figures are recorded in an environment of high crude oil prices in the current context, marked by the war in Ukraine. Thus, this Thursday the barrel of Brent, a reference in Europe, was trading around 84.7 dollars, while the American Texas was trading around 77.7 dollars.

With these levels, the price of unleaded gasoline of 95 and without taking into account the subsidy, remains in Spain above the average of the European Union, located at 1,729 euros per liter, but below that of the eurozone. with an average price of 1.78 euros.

In the case of diesel, the price in Spain is higher than the EU average, which is 1,851 euros, and similar to that of the euro zone, with a price of 1,876 euros. 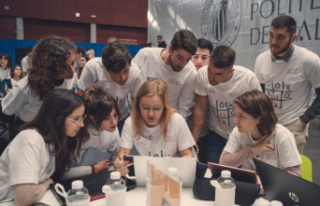 ANNOUNCEMENT: 25 large companies are coming to the...