The Rocket runs out of gas in third

Sunk by former Montreal Canadiens prospect Will Bitten, who had a four-goal performance, the Rocket lost 6-3 to the Springfield Thunderbirds on Wednesday in Laval. Sunk by former Montreal Canadiens prospect Will Bitten, who had a four-goal performance, the Rocket lost 6-3 to the Springfield Thunderbirds on Wednesday in Laval.

Drafted by the Habs in the third round in 2016, Bitten scored his fourth, fifth, sixth and seventh goals – the last in an empty net – of the playoff tournament.

Despite all its good will, Jean-François Houle's troupe was never able to come back from behind. It therefore trails 2-1 in this Eastern Conference final of the American League.

Taking advantage of the boosted support of the crowd, the Rocket had however quickly passed a sequence in inferiority. A few minutes later, Rafaël Harvey-Pinard opened the scoring with a sharp shot that beat Joel Hofer. It was the second goal in as many games for the Quebecer who had not hit the target in his first nine playoff games.

Nathan Todd, however, tied the game before the end of the first period. A goal from Hugh McGing, late in the second period, then allowed the visitors to take the lead. Never, in this series, the Thunderbirds had led in the score; their first victory had indeed been obtained in overtime.

Playing on the same line as Bitten, Mackenzie MacEachern also shone in the victory with three assists. Their companion Dakota Joshua was an accomplice to two goals.

Cayden Primeau was bombarded with 43 shots in that game, giving up five times. He nevertheless had the opportunity to show his know-how by helping his people to kill a long sequence with two men less in the second period. At the other end of the rink, Hofer made 36 saves, also allowing goals for Corey Schueneman and Nate Schnarr.

Meetings number 4 and 5 will take place Friday and Saturday in Laval.

1 The Cataracts win top honors 2 Fayolle Jean Jr: an actor in demand 3 Patrick Roy: touched that his cry from the heart was... 4 Direction the worlds for Mia Vallée 5 Drunk driver reinvents parallel parking 6 Snowboard cross: the World Cup is finally coming home 7 Azerbaijan Grand Prix: Pérez for the pass of ...... 8 The Alliance cannot defeat the defending champions 9 The big star of the match: the crowd 10 A trilogy of Symphonic Harmonium in Montreal 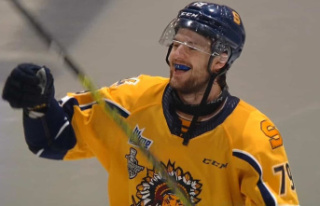