Tourism: inflation does not take a vacation

Oh, the holidays! Nothing less relaxing for those with young children, to which is added this year the stress of not doing enough, due to a budget holed by inflation.

Oh, the holidays! Nothing less relaxing for those with young children, to which is added this year the stress of not doing enough, due to a budget holed by inflation.

If this is of course an average, courtesy of a CAA-Quebec survey.

That said, the numbers don't lie: everything costs more, including vacations.

The milestone of $1000 quickly reached

"Today, you leave for two days with one or two nights, it's hard for less than 1000 dollars even in Quebec," said Guillaume Bégin, who came from Beauce with his family to Parc Safari, in Hemmingford. , in Montérégie, last week.

Hard to believe when you look at the price of hotel rooms: 561 dollars per night at the simple Hilton in Quebec, for example. This is a four person room with two queen beds.

In Montreal, surprise, the same room at the Hilton is $268 a night.

All in the same boat

Add to that the exorbitant price of gasoline, which is also more expensive in Quebec than almost anywhere else in North America, especially among our neighbors in Ontario.

"People are going to make two stops rather than the four planned on the itinerary," a CAA-Quebec spokesperson said earlier this week of the 2022 vacation.

There again, it's easy to believe when you look at the price at the pump, which remains at an average of $193.3 for a liter of regular gasoline on Quebec soil.

But whether we sleep at the hotel or drive, everyone is in the same boat.

Compared to inflation, the figure has not changed in three years.

Quebecers must therefore do more with less, and never as much as during the sacrosanct summer holidays.

All that remains is to wish them good luck!

Gasoline, meals, tickets... families forced to stretch their budget from $200 to $300 to go see the animals at Parc Safari are feeling the financial pressure more and more.

"Everything went up, so don't want to, you have to cut somewhere, so the holidays, you have to come and play a little on it," says Ylanka Moreau, on vacation during daycare leave for her son, Jayden.

"Just going to dinner at Parc Safari, it's going to cost $70 for sure for two people and a two-and-a-half-year-old child," she observes, under a blazing sun.

By her side, in the crowded Parc Safari parking lot, her partner Guillaume Bégin, who took two days off with his family, is already thinking about going to bed to be sure not to end up in the water at night. .

"With tickets, gas and meals, we must be close to $250," shares Andréanne Richer, a pregnant civil servant from Lanaudière, whom we approached at the entrance to the park near the musicians.

To reduce expenses, the mother of the family opted for Parc Safari because the place offers several entertainments at one and the same place.

"We try paid places for children, like here where there is water and activities like the zoo," shares the mother of the family.

A little further on, Mohamed Rouissi, accompanied by his wife and three children, also calculates his exit at several hundred dollars.

"With food, gas and all, it's a $300 outing. That's a lot of money,” concludes the man, who says he sees prices exploding everywhere.

An owner of a market in Saint-Philippe, in Montérégie, still sees as many vacationers as before coming to spend their money at home, with the exception of cigarettes where he has noticed a drop in recent months.

“People are spending like before. If they feel like buying beer, they buy beer,” sums up Sylvain Rathé, owner of the Marché, which looks like a general store, in Saint-Philippe, in the MRC de Roussillon.

“The only area where I feel a decrease is cigarettes. They are made expensive. People are more careful, ”shares the man who has a business planted in the heart of the city with five campsites.

This is also what the giant Couche-Tard has noticed, as Le Journal reported last month: with inflation, smokers tend to turn more to contraband cigarettes.

“In Canada, we saw a bit more pressure in the cigarette category. There seems to be a change due to the black market,” noted its chief financial officer Claude Tessier.

According to Couche-Tard, there may also have been some increase in tobacco consumption during the pandemic, which has now dissipated.

However, despite the lack of breath for cigarettes, Sylvain Rathé's market on Route Édouard VII, in Saint-Philippe, is teeming with vacationers, who pass quickly like lightning to buy McCain cakes, pâtés and his "Pizza Québec".

"I don't see many people saying, I'll take the cheapest one. They are still on their way to go,” observes the man between orders.

At the checkout, between sunscreen, aloe and caps, the owner of the neighborhood grocery store, who took possession of the business in 2001, has no impression that holidaymakers have more restraint than before.

Even though cans, like peas, have 30-cent or 40-cent increases, customers don't miss out.

"It's not long, a small purchase of $60 or $65, bacon, eggs, cereal. There is no impact. I think people carry on as usual,” the businessman concludes.

Last May, the Association des Marchands Dépanneurs et Épiciers du Québec (AMDEQ) said it was disappointed to see that the Trudeau government's budget had nothing concrete to limit the fees charged to merchants by the big credit credit card transactions.

Fewer outings, fewer restaurants, shorter time... When everything costs more and the vacation budget is not stretchable, families have no choice but to do less than usual.

With the price of gasoline rising sharply, Eric Bernatchez considers himself all the luckier to have his place every summer in a campsite in Saint-Jean-Baptiste in Montérégie.

"It's cheaper than traveling outside," explains the maintenance worker from the Société des Transports de Montréal. Here, we are good, it avoids weekends in Pointe-Calumet or Saint-Sauveur which would cost more. »

This year, the father of Laval must cut in some vacation expenses while prices are all on the rise.

“At five in the restaurant, it’s made $150. Before, we did two restaurants a week, now it's more like one every two weeks, "comments the camper.

A CAA Quebec poll, conducted in the spring to gauge Quebecers' travel intentions, shows that Eric Bernatchez and his family are far from alone in this situation: 43% of Quebecers said that the rise in gas prices would have an impact on their vacation.

Nicolas Ryan, director of public affairs at CAA Quebec, says that "the desire to travel this year is strong, but there are changes in the distance of the route, travel once at destination and spending on food and entertainment ".

The rest of the year too

And to continue to afford vacations, it is also the rest of the year that they "will deprive themselves a little".

Eric Bernatchez says he and his family will go to the movies less often and go out with family or friends less, to compensate.

Audrey Jacques, resident of Laval, also spends every summer at the campsite. When she hears her friend sitting next to her talking about going out, the young mother says with a certain nostalgia: “Family lunches on Sundays were like a ritual. But we're not going there anymore. Whether we're on vacation or not, everything has increased, so we have to reduce."

The other family tradition in which the educator in the daycare service had to slash, with regret, is the summer week in Gaspésie, region of origin of her spouse.

“We leave for less time because of the price of gas. With inflation, the budget did not pass, it took two days off. We will leave for five days instead of a week,” she explains.

This Saturday, they will therefore leave with their toddlers of three and five years for Carleton-sur-Mer. Eight hours on the road without the usual overnight stop in Rivière-du-Loup. They will thus save two nights in a hotel and, despite everything, will treat themselves to a boat trip around the Rocher Percé.

1 Tourism: welcome to summer vacation hell 2 Adirondacks: a breath of fresh air 3 Pick blueberries near the US border 4 The planet is hot: even grapes get sunburn 5 War in Ukraine: death in battle “as a hero” 6 [IN IMAGES] 20 years of the first gay marriage in... 7 New trial requested in murder case 8 The Montreal king of Xanax is preparing an exit plan 9 Complexity of the tests: $4.2 million more for the... 10 In the panties of a drag king 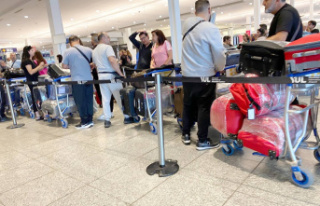