Youth unemployment falls 12% in the year, to historical lows, and permanent hiring triples, to 38 out of every 100 contracts. 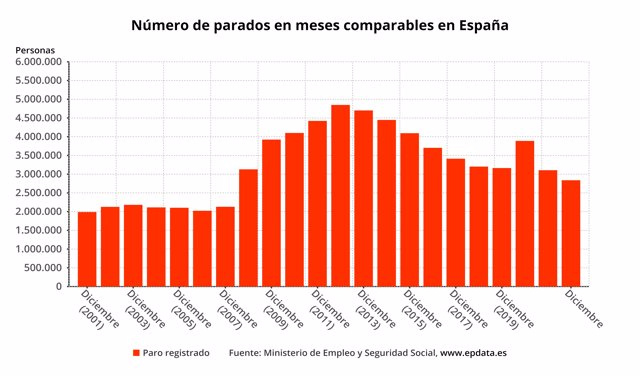 Youth unemployment falls 12% in the year, to historical lows, and permanent hiring triples, to 38 out of every 100 contracts

Registered unemployment in the offices of the public employment services recorded a decrease of 268,252 people (-8.6%) in 2022, to a total of 2,837,635 unemployed, the lowest figure at the end of the year since 2007, The Ministry of Labor and Social Economy reported this Tuesday, which stressed that these data have been obtained "in an international context that continues to be marked by uncertainty."

With the decrease registered in 2022, unemployment chains two consecutive years of setbacks after the one recorded in 2021, when there was a record drop of 782,232 unemployed due to the end of the restrictions associated with the pandemic.

The 2.83 million unemployed with whom 2022 closed has been reached after unemployment fell in December by 43,727 people compared to the previous month (-1.5%), its second best data in a month of December since 2018, only surpassed by that of 2021, when it fell by almost 77,000 people. With this monthly decrease, three consecutive months of falls accumulate.

In seasonally adjusted terms, unemployment fell by 24,138 people in December compared to November.

In relative values, the greatest decline in unemployment was in the Balearic Islands (-35.9%), followed by Madrid (-18.5%) and Extremadura, where unemployment fell by 10.5% last year, with 9,669 unemployed less. These three communities were the only ones that registered double-digit unemployment declines in 2022.

For its part, the smallest annual decreases in unemployment in absolute terms occurred in Navarra, with 416 fewer unemployed than in 2021, and in La Rioja, which subtracted 742 unemployed in the year.

Of the total contracts registered in 2022, just over 7 million contracts, equivalent to 38.4% of the total, were permanent, with a growth of 232.5% over the previous year.

The Ministry headed by Yolanda Díaz has highlighted that in 2022 nearly five million more permanent contracts were signed and nine million fewer temporary contracts than in 2019, the year before the pandemic. Of these, she emphasizes, the contract that has increased the most has been the ordinary full-time permanent contract, with 1.7 million more.

In total, 39% of the contracts carried out in December were permanent, a percentage that has fallen four points compared to the previous month, when the proportion of permanent contracts was 43.2%. Temporary contracts, for their part, represented 61%, with 782,002 contracts, 51.8% less than in December 2021.

Labor has also reported that spending on unemployment benefits stood at 1,743.4 million euros in November (latest data available), 5.8% less than in the same month of 2021.

At the end of November, the total number of beneficiaries of unemployment benefits reached the figure of 1,799,838 unemployed, 1.2% less than in the same month of 2021.

The average monthly expense per beneficiary, without including the agricultural subsidy in Andalusia and Extremadura, was 991.2 euros, 5% less in the interannual rate.

The coverage rate of the unemployment protection system stood at 66.3% in November, compared to 60.63% in the same month of 2021. 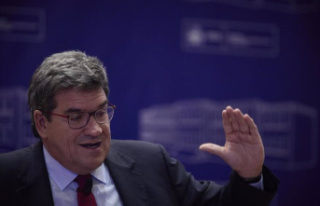