Unforgettable baptism in the cradle of golf

ST ANDREWS, Scotland | Four Beaucerons have been living the trip of any sports fan for a week in the United Kingdom.

ST ANDREWS, Scotland | Four Beaucerons have been living the trip of any sports fan for a week in the United Kingdom. After a stint at Wimbledon, they headed to St Andrews for the Open.

Éric, Simon, Jean-Philippe and Olivier arrived at the Old Course in the middle of the week. Since then, golf enthusiasts have literally floated on a cloud in the birthplace of the sport.

The four friends of the Moulin Laflamme golf club in Saint-Benoît had been waiting impatiently for this moment for a very long time. Lucky at the R ticket draw

“Being here with my son Olivier for this 150th edition is truly amazing. It is a very special moment. It's a unique place,” expressed Eric, 47, looking around near the 18th tee.

The four friends discover at the same time all the particularities of the Scottish links. Unknown courses for golfers who have never set foot there. They are extremely rare in North America.

“As a golf maniac, it really is quite a landscape change. We see a new style. The bunkers are very impressive, recognized Jean-Philippe and Simon. We are experiencing a sporting and cultural shock. »

If Éric and Olivier visited the Bay Hill golf club in Florida during the Arnold Palmer Invitational, Simon and Jean-Philippe experienced their baptism of fire at a professional tournament. They see all the big stars pass a few feet before their eyes.

"When you hear the quality of contact with the ball, it's striking. Unfortunately, when we saw Tiger (Woods) hit, he missed. But to see him nearby and see him perform is impressive,” said the group that followed him a bit in the first round.

Due to his high score, they decided to follow other golfers on the course.

They would have liked to have been among the thousands of spectators near Swilcan Bridge on Friday to see Woods wave his cap in this historic march, perhaps his last towards the 18th pennant of the Old Course.

"It hurts to see these images, because we don't want him to stop playing. I started golf because of him. But I understand his situation. In my opinion, he had no fun playing that way this week, pleaded Simon.

"The end of his career is closer than the beginning," added his good friend Jean-Philippe. When we saw Tiger play, we understood that it was possibly his last Open at St Andrews. I'm glad I got to see him here. »

As for the next champion of the Claret Jug, no one agreed to identify him clearly.

They tossed out the names of Rory McIlroy, Dustin Johnson and Cameron Smith as strong suitors.

One thing is certain, they will be present this afternoon to applaud the champion.

And if luck wills it, they could well be back in England next year for the Open at Royal Liverpool.

1 CF Montreal perseveres and wins 2 British Open: new adventure at the Open 3 Tour de France: Hugo Houle supports his teammates 4 Régates de Valleyfield: qualifications full of suspense 5 Half Moon Run at the FEQ: "It's going to... 6 FouKi at the FEQ: “I do what I want to do” 7 Plessisville: a cyclist in critical condition after... 8 The TAT orders the cancellation of the strike at Urgences-Santé 9 Disappointment for Andre de Grasse in Oregon 10 British Open: very close to the dream 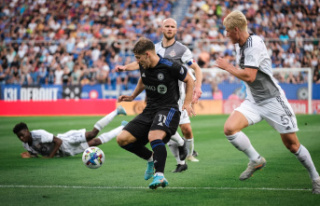