The Addams Family is definitely in vogue.

The Addams Family is definitely in vogue. The Netflix series, "Wednesday", has once again caused a stir by exceeding 5 billion minutes of viewing for its first week of broadcast.

• Read also: The 2nd season of “Portrait-robot” on Club illico: who attacked Maryse and will Eve see her son again?

Jenna Ortega's popularity is not about to go down. The actress, who plays the terribly mischievous Wednesday in the series of the same name on Netflix, can rejoice in the success of this program. According to Nielsen, the series broke a new record with 5.3 billion minutes watched in its first full week of broadcast, from November 28 to December 4, 2022. “Wednesday” is the fourth program to achieve the feat of surpassing the 5 billion views milestone, which has only been beaten seven times previously, Nielsen said.

The series from the American giant, released on November 23, 2022 on Netflix, is used to breaking records. For its first five days of availability, “Wednesday” had already reached 5.988 billion minutes watched, setting a record for the second-largest streaming week ever by Nielsen. First, we find the fourth season of “Stranger Things”, with 7.2 billion minutes viewed in its first week on Netflix.

On the film side, the Norwegian feature film "Troll" is essential with 880 million minutes watched, followed by "Bullet Train" with Brad Pitt and its 701 million minutes watched, available since December 3 on the streaming platform, i.e. two days less than the top-ranked film. Netflix dominates the top 3 since "The Noel Diary", a seasonal comedy in the pure American tradition, which recorded 517 million minutes watched, completes the podium. With the end-of-year celebrations, the cult film "Mom, I missed the plane" regained momentum by winning fourth in the ranking of the most streamed films, all platforms combined, with 480 million. minutes watched.

1 A stalker at “Love is in the meadow”?: production... 2 Roku launches its own range of smart and connected... 3 Strike: the SQDC temporarily extends its same-day... 4 The Ibex closes Wednesday with a rise of 1.93%, to... 5 Still no "speaker" in the US Congress after... 6 Protecting travelers doesn't go far enough, says... 7 Mitchell, Doncic, Embiid... a wealth of talent, a... 8 Lionel Messi back in training with PSG 9 Gabrielle Fortin: excellence at school and on the... 10 Ottawa Senators: A very special new mask for Cam Talbot 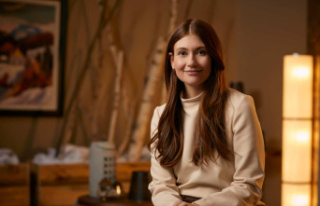 A stalker at “Love is in the meadow”?: production...