Wildfire out of control in Lytton, British Columbia

The Nohomin Creek wildfire, near Lytton in British Columbia, remained out of control on Tuesday despite the hard work of firefighters and the wind did not improve the situation.

The Nohomin Creek wildfire, near Lytton in British Columbia, remained out of control on Tuesday despite the hard work of firefighters and the wind did not improve the situation.

The fire, which was started last week, is currently 20.58 square km. The BC Wildfire Service (BCWS) said the fire is more active to the west. He predicts “potentially volatile” fire conditions during, as hot and dry weather will still be present in the coming days, according to “Global News”.

Monday afternoon, winds of up to 60 km / h complicated the work of the sappers.

Many efforts are being made by four firefighters, 19 First Nations firefighters and a dozen helicopters to try to control the flames. Some nearby places have historical value.

“A representative from Lytton First Nation, who specializes in archaeological sites and cultural values, is working with the BCWS team to identify features that have high cultural value near Stein Valley. It will provide advice and recommendations to ensure its protection,” said the “BC Wildfire Service”.

The fire forced the evacuation of around 100 people and six residences have been destroyed so far.

The cause of the fire remains unknown.

Since the start of the year, 297 wildfires have destroyed 11,153 hectares in British Columbia, according to the BC Wildfire Service.

1 Drowning prevention week, the Côte-Nord particularly... 2 Landslide: a crevasse that is growing and causing... 3 Emergencies in “critical situation” at the CHU... 4 Quebecers are not done with inflation 5 The inflationary effects are being felt: considerable... 6 Vote in Congress to protect same-sex marriages 7 Steve Bannon, ex-adviser to Trump, accused of believing... 8 “Hell”: homeless people affected by the heat 9 Immolated body thrown in the garbage, the family still... 10 CHSLD: Quebec ensures that air conditioners are available 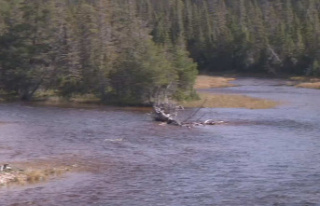