According to Attac-judgment to charitable status: a Cautious joy

The financial authorities want to deprive any other organisations charitable status. But it doesn't help all. Officially not a non-profit: Attac in Protest a 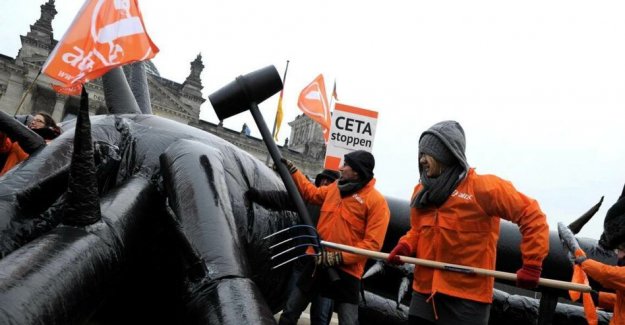 The financial authorities want to deprive any other organisations charitable status. But it doesn't help all.

Officially not a non-profit: Attac in Protest against a free trade agreement in 2016 photograph: Markus Heine/imago

"This step is long overdue and absolutely necessary": With these words, the globalization-critical network Attac has responded to the decision that until the end of 2021, no other political organizations to lose, on the basis of the so-called Attac-judgment of their charitable status. Self-Attac of the decision will not benefit but first.

The so-called trust scheme to which the financial authorities of the Federation and the länder on last Friday had agreed to, only applies to organisations which are currently charitable. For you are to be drawn from the judgment of the Federal court of Finance (BFH) to the charitable status of Attac up to the end of 2021 "no negative consequences", - was stated in the decision template.

Also, for the campaign organisation, Campact, and the democratic centre of Ludwigsburg, which had been withdrawn as a result of the Attac-judgment, the non-profit status, it changes about nothing. Nevertheless, Campact-Executive Board Felix Kolb welcomed the agreement: "it shows that the financial authorities are now, finally, a problem consciousness about the new situation is created by the judgment," he told the taz.

The Federal fiscal court had not decided a year ago that political education is considered to be a non-profit, if a certain political course is represented. Attac had lost the benefit to the public, which leads, among other things, that donations are tax deductible and the projects can be from nonprofit foundations financed.

Large, the facilitation of Stefan diefenbach-Trommer of the Alliance, "legal certainty for political will-formation is" of numerous non-profit organizations. "Without this Moratorium, hundreds of other clubs in the loss of their charitable status would be threatened," he said. "Now you have a respite."

it is Open whether this is also true for the petitions platform change.org . Of this the deprivation of charitable status threatens, according to their own information also. Unlike in the case of Attac, the funded purpose is here, but not political education, but promotion of democratic education. Managing Director Gregor Hackmack is still cautiously optimistic: "We see in the current decision, a political will and hope this also helps our argument," he said.

The Berlin Senate administration for finances, for change.org responsible, expressed with reference to the tax secret to the case. Basically, the country would advocate for an extension of tax exemption rules, said Finance Minister Matthias Kollatz (SPD): "For our democracy to have an active and critical civil society is fundamental."

Attac the financial authorities called on to revise the decision for those organizations that have lost the non-profit status already. This is according to the Federal Ministry of Finance but not not possible. Could benefit the organisations involved but by the proposed Reform of charity law.

Here is long been waiting for a bill; according to data from the Ministry circles he is expected to be submitted this spring. This is also what Stefan diefenbach-Trommer of the Alliance for legal certainty is of the essence. The need for a "well-thought-out bill" that allows for diverse political Engagement of organisations.

1 iPhone 12 is on the Brink: the Next accident-forecast... 2 Earlier in pension thanks to the credit system - This... 3 Italy wants to distribute due to Corona billion to... 4 Demand for supply chain law: companies want to state... 5 To cages close Single for sows: animal protection... 6 650 employees affected: Real decides before the sale... 7 Norway's pension Fund: To a lot of coal by coal 8 Start of trading United States - What is the Wall... 9 EU climate law: Brussels gets the ass is not high 10 EU climate protection act introduced: crash-landing... iPhone 12 is on the Brink: the Next accident-forecast...