After England's reduction in interest rates against pandemic: the ECB is now under even more pressure

could look Like a concerted monetary and fiscal policy to combat the crisis, demonstrated yesterday – as in the 2008 financial crisis – the UK. First, the Centr could look Like a concerted monetary and fiscal policy to combat the crisis, demonstrated yesterday – as in the 2008 financial crisis – the UK. First, the Central Bank lowered the key interest rate unexpectedly from 0.75 to 0.25 per cent and also announced a range of measures to support lending to the real economy. Then in the draft budget of the Chancellor of the exchequer Rishi Sunakbereit funds against the consequences of the Coronavirus pandemic, with
exceeded 30 billion British pounds to the expectations. 12 billion British pounds of which were for care on short-term measures, such as funding for health, sick pay or loan guarantees. The Rest should be in the longer term, for the redemption of the election of the Tories as tax cuts promise to be used. British shares reacted in the Morning a positive effect on the reduction in the base rate, could not compete in the afternoon, but the crash on Wall Street and shot, in spite of the decisions on the Minus.


Hope on the ECB?

ECB President Christine Lagarde, yesterday, warned of a extreme economic shock caused by the Coronavirus pandemic, and a comparison to the 2008 financial crisis pulled. By now it should be clear that the ECB will today adopt a more expansionary monetary policy. I reckon with a reduction of the Deposit rate of minus 0.5 to minus 0.6 percent. Because the Central Bank is the resulting Euro is likely to outweigh weakening compared to the stresses for the financial sector
. The latter could, of the amounts that the ECB is also greater in the case of negative interest rates, excess reserves, contrary to taxes. In Addition, new credit facilities for commercial banks should be announced, with the aim to support small and medium-sized enterprises in the most affected regions and sectors. In an expansion of the bond purchases, I don't think this is excluded. Whether this is enough to calm the markets, but it remains to be seen.
Unconventional measures like helicopter money, or the purchase of shares should be in the governing Council of the ECB is hardly enforceable. Therefore, in itself, could remain a verbal Intervention in the style of the famous "Whatever it takes" without any major effect. From my point of view, it needs to reassure the decision of the extensive fiscal support measures at the EU summit next Monday. The probability of this happening is likely to be increased by the approval of German Chancellor Angela Merkel to the warnings of the ECB President.

The credit rating Agency Moody's expects that the Coronavirus pandemic is likely to weigh on the development of the business of European banks, especially in the first half of the year 2020. The credit rating of individual borrowers deteriorates, loan defaults are likely to remain the exception. The
European credit institutions have increased in recent years, its capital cushion, and the share of bad loans in their balance sheets reduced. A brief period of weakness, should you can, therefore in
as a rule, without any major problems to cope with. It is according to the first estimates, to imagine that over the next three years, seven percent, or 30 billion euros of the profits of European banks disappear. However, individual governments have signalled that they are willing to support companies that could be affected because of the pandemic in the wrong location. The loan losses could be curbed as a result. The significantly greater decline
European banks compared to the overall market in the course of the Coronavirus crisis may be exaggerated a bit.
In the case of a calming of the currently tumultuous situation, I expect slightly
rising longer-term interest rates and the Outperformance of the sector compared to the overall market.

psychology determines which courses you can achieve high returns with Social Trading (partner offer) Now the stock sensor Germany for free
test to do with the Swiss foreign currency reserves?

Because the Swiss national Bank (SNB), must intervene to curb strength of the Swiss franc often has increased their balance sheet total in the last quarter. It now amounts to about 850 billion Swiss francs – the equivalent of 120 percent
of GDP, a top figure in an international comparison. The vast majority of which is attributable to foreign-exchange reserves, among other things, in the Form of shares and bonds, the SNB has become one of the world's largest investors. The assets of the Central Bank and the profits that arouse political desires. Other States with high foreign exchange reserves, such as Singapore, have transferred their foreign exchange reserves, therefore, already in a state property Fund. Switzerland would follow the example could be investment decisions are greater return expectations and the Central Bank would be protected from political influence better. Also, the Swiss franc is not expected to be under such a strong upward pressure. Because of the high foreign currency reserves at the SNB cause the currency to investors than a "safer Harbor" considered and increasingly will be in demand.

chemical reactions run slower the colder the environment is. Low temperatures can, therefore, help some of the experiments almost in slow motion to perform. At Harvard University chemist Kang-Kuen Ni has now reached a temperature of 500 billionths of a Kelvin above absolute zero. For a brief Moment, her lab was probably the coldest point of the universe. The "short", however, is to be taken literally: Prof. Nis Experiment lasted, even in the slowdown, only three micro-seconds.

With the stock recommendations of the Bernecker exchange-compass, you can get more out of your money! (Partner activity) 30 days free to try!

1 Harmful nitrate in the water: Left-hand farmers against... 2 The ECJ has decided: If your flight is twice too late,... 3 278 gas stations for sale - OMV withdraws from Germany... 4 Altmaiers contacts to the wind power opponents: tea... 5 Product must not be used! Aldi-Süd returns to the... 6 RWE earned more with energy trading - share still... 7 Virus-the fear is now palpable: the railway is reporting... 8 Virus brings Fraport in distress: the airport Association... 9 After the Oil scandal, the Arabs take now Putin is... 10 Minister for agriculture, food supply: in Spite of... 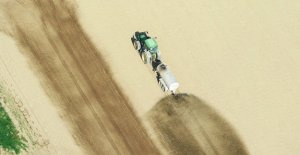 Harmful nitrate in the water: Left-hand farmers against...