Criticism of Corona-utility program of the EU: Too little, Too late

The EU Commission provides up to 25 billion euros against Corona available. Far too little against the Virus, say critics. A lost respirator mask in front of 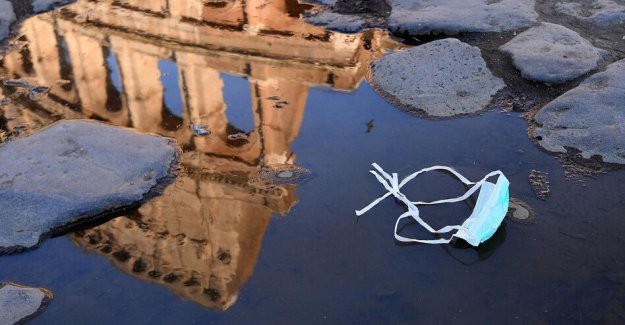 The EU Commission provides up to 25 billion euros against Corona available. Far too little against the Virus, say critics.

A lost respirator mask in front of the Colosseum in Rome photo: Alfredo Falcone/ap

BRUSSELS taz | It is reminiscent of the worst periods of the Euro crisis: In a hectic scheduled video conference, the 27 heads of state and heads of government of the EU, the first Europe-wide programme of assistance against the Coronavirus crisis, cobbled together. The panic mode, especially France and Italy, had pushed, seems to have helped.

Suddenly is not only the money as Commission President Ursula von der Leyen promised up to 25 billion euros to support struggling companies. Now, finally together, medical protective equipment should be procured so far failed due to national restrictions, for example, in Germany and France.

Von der Leyen, wants to leave the "Ghost flights" with half-empty planes, which were favored by the absurdity of EU rules. In addition, there will be future rounds of daily Crisis, with all concerned Ministers of health, via the phone. So far, they had met twice in Brussels to decide anything.

For Brussels circumstances, the EU presents a tremendous pace. However, from the point of view of many politicians and Economists this is not always enough. The announced 25 billion euros, are not a fresh money, but would abgeknapst from the already scarce EU Budget, writes about Andresen the green EU budget expert Rasmus.

in Addition, 25 billion, little in comparison to what is currently being discussed in the United States. In Washington, increases of up to 700 billion dollars of tax talk, the US fed has already lowered interest rates. By contrast, the European wait for the Central Bank; the zero interest rate is not a lot of room.

Also, the EU Finance Ministers have not yet become active. You want to meet next week in Brussels to talk about the "fiscal measures" – i.e., tax breaks, investment, and economic programs. France and Italy call for an end to austerity, but Germany is on the brake.

critique there is also the fact that the EU wants to respond for the first time, coordinated to the crisis, however, no specific relief has announced programs for the particularly affected Italy. Italy might need European assistance, such as from the Euro rescue Fund, the ESM, said the German Economist Peter Bofinger.

The government in Rome have opportunities because of the high levels of debt in the country is limited, as Bofinger. Europe could not allow a monetary crisis in addition to the Corona epidemic. The EU has so far announced only to the strict deficit rules for the Euro is flexible. But that is unlikely.

Frustrated Italy's EU Ambassador Maurizio Massar pointed out that China stands by his country with hands-on help from Brussels, but nothing was coming. So Beijing has promised two million protective masks and 100,000 respiratory devices – for free. Rome had also set up its European partners for help, but received no response.

in fact, major decisions – such as on an economic program were on the next EU summit at the end of March moved. France wanted to act immediately, but German Chancellor Angela Merkel blocked. Norbert Röttgen, the candidate on the CDU presidency, for: "For the people and the economy, the is too late."

You can put it with a Slogan from the Euro crisis: "Too little, Too late." The EU is doing too little and acting too late, according to critics. Merkel has to dress warm, when it comes to the EU summit in Brussels. Or it will be a video conference – for fear of the Coronavirus?

1 Against accidents, fire, and anarchists: builders... 2 Little Chance of significant recovery over 11.447... 3 Due to hamster, no food purchases soon and more in... 4 According to the record of the year: Adidas further... 5 Economic aid because of Corona: the crisis in The... 6 Fridays for the Future, now, virtual: Greta advises... 7 Species diversity in lower Saxony: the peasants against... 8 Volkswagen again increased the annual bonus for employees 9 Action plan of the EU for Recycling: From Old to New 10 Aldi makes its customers also in Virus-times of the... Against accidents, fire, and anarchists: builders...