From biodiversity to climate protection: by 2020, to be achieved in the EU and in Germany, many of the environmental objectives. But the prospects are bleak. 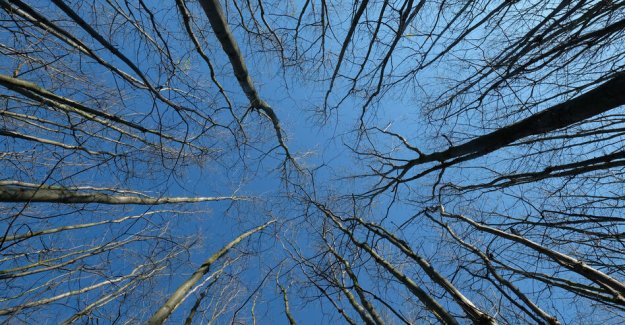 From biodiversity to climate protection: by 2020, to be achieved in the EU and in Germany, many of the environmental objectives. But the prospects are bleak.

Also in forest protection, the policy is lagging behind: instead of 5 only 3 percent of the Wilderness photo: Reuters

BERLIN taz | "everything is not always bad," wrote Federal environment Minister Svenja Schulze (SPD) shortly before the end of the year 2019 on Twitter. And presented "success in environmental policy", including the climate protection act, the ban of plastic bags, the price of CO2, the wilderness Fund, or the programme of action for insect protection. Her conclusion: "In the past twelve months we have achieved in the environmental policy."

The view forward is much bleaker. Because 2020 will show that many of the official Ökoziele in Germany, missed, or forgotten to be moved. When it comes to climate protection, biodiversity, the consumption of resources and the protection of air, water and soil, the official objectives set are achieved, this results in a taz-Overview. Although will be officially settled only at the end of the year, but already now is clear: in 2020, the Federal Republic of Germany makes silk an environmental revelation.

the German LCA looks at first glance not so bad. Some of the objectives for 2020 are to be achieved, or even exceeded, with The share of green electricity to the electricity should be according to government plans, 35 percent, in 2019, an average of about 43 percent. The EU meets its climate targets for 2020, and Germany has a large share of it. And for the first Time, the Federal Republic of Germany holds the EU limit value for fine dust in the air is, however, already been mandatory since 2005.

That shows the Problem. Because the goals of the EU were and are fond of low (climate target is only 20 percent reduction of CO2 emissions). They remain ambitious, they are often only with great delay – or equal to-rear moved.

as probably the most famous of missed promise: The German target: 40 percent less greenhouse gases than in 1990 should, in 2020, from German chimneys and exhaust pipes, for example, have insured all Federal governments since 2007. The coalition agreement of the Grand coalition of 2018 was what the Expert said this since a long time: The target is hit. Now the climate gas emissions will be decreased by the end of 2020, only 35 percent are conservative estimates. The climate package of the Federal government to ensure that at least the objectives for 2030 (minus 55 per cent) can be achieved. German Chancellor Angela Merkel said at the launch of the "climate package" in September: "We believe that we can achieve the goals."

Are not met goals, they stretched like time. So happened in the organic farming : 2000, the green agricultural Minister Renate Künast promised, by 2020, 20 percent of Germany's arable land would be processed according to biological criteria. Subsequent governments reversed the number of the year, as 2020 threat moved closer. So far, Stand 2018 to be conducted on 9.1 percent of the German Fields in the organic farm, it is the Federation of the organic food industry BÖLW. And the 20 percent appeared in the coalition agreement of the Red and Black again, but with the target in 2030.

A decade more time, this magnanimity of the Ruling yourself if the solution is actually pressing environmental questions. In 2010, the EU Commission suspended its own target of 2001, the loss of the biological diversity up to 2010, to stop time, to 2020. Now ten years have passed. And the environmental authority of the EU accounted for bitter, in a recent report, "state of the environment in Europe": "The protection of biodiversity and nature remains the largest area of entmutigendem progress. Of the 13 targets for 2020, only two are likely to be achieved. If these Trends up to 2030 further, the deterioration of the state of nature and the pollution of air, water and soil progression.“

Germany formulated the "national biodiversity strategy" (NBS) as: by 2020, biodiversity in Agriculture should be increased "-Ecosystems significantly". The reality looks quite different: On German Fields of studies in recent years showed a rapid loss of animal and plant species. The NBS lists, where environmentalists fail to meet their own targets: by 2015, 19 percent of all arable land should have a "high natural value", but there were only 11.4 percent; three-quarters of the population should be informed in 2015 about the threat to the species, but it was only a quarter; 100 percent of all rivers and lakes should be 2015 in a "good or very good ecological status", but it was only 8 percent. And by 2030, the species diversity, as measured by the inventory of the 51 native species of birds is to be achieved, on a well-defined state. At the last count, in 2013, the diversity amounted to only 68 percent of the planned value.

with the forest protection the Federal Republic is still behind their own environmental objectives. In 2007, had called for the strategy on biological diversity, to ensure by 2020 a total of 5 percent of the area of forest as "natural forest" free of human influences. Now, the competent Federal office for nature conservation is a response to an inquiry of the green group, only 3 percent to be achieved this year.

In the fierce debates of the past few months to driving bans for Diesel and liquid Manure by farmers is almost gone, and that here, too, for years, laws are being disregarded: since 2010, the EU is binding-limit of 40 micrograms of nitrogen dioxide (NOx) per cubic meter of air, annual average. In 39 percent of all measuring stations in the German cities of these limits in 2018 have been exceeded according to the Federal environment Agency.

Also, the nitrate in the groundwater, the laws of little. Since 2008, an EU regulation requires that groundwater must not be more than 50 milligrams per Liter loaded. More than a decade later, show it on every fifth measurement point in Germany Overruns that can endanger the health. The European court of justice has condemned Germany for this reason. Against the new fertilizer Ordinance, which EU law prevails, to run farmers storm.

Also in the fight against the loss the governments watered down their own goals. In 2002, the "national sustainability strategy" of the red was green, the Federal government, by 2020, the development of a free country should be reduced with new houses, businesses or roads drastically: From nearly 130 hectares of the day, 180 football fields, to only 30 hectares in 2020. In fact, it has been possible to halve the consumption of that at that time, on approximately 58 acres. But the new aim of the government now have for 2030. And will also be again torpedoed: an Amendment to the building code, the Grand coalition wants to boost the "Build outside" for another three years, to facilitate – and thus the loss of land further, as the FEDERAL government complained.

This contradiction is also reflected in the official attitude. In 2018, said the Federal government, with the new sustainability strategy show you, "that it is important to strengthen the idea of sustainability in all policy areas". Two years earlier, the official balance sheet, this strategy had shown, however, that especially in the case of many Eco-indicators, such as ocean protection, energy consumption, transport or nitrate are the Trends in the wrong direction or far away from the target.

1 Uncomfortable prospects: millions of pensioners before... 2 The ECJ judgment makes it clear that the occupational... 3 Tough year for premium savers: Over 200,000 Sparkasse... 4 Fires in Australia: tourists get out of fire area 5 Natural disaster in Indonesia: dozens killed in Floods 6 Lack of environmental policy: smoke signals from the... 7 Consumer advocates in front of the VW comparison,... 8 Consumer advocates before the comparison, the compensation... 9 Cyber security at BMW: a Hacker from Vietnam in Germany 10 SPD proposal to wind turbines: a citizen's money for... Uncomfortable prospects: millions of pensioners before...