farmers want to demonstrate, however, that Germany have reported to the EU "misleading measurements". Experts are saying: The allegation is not true. measur 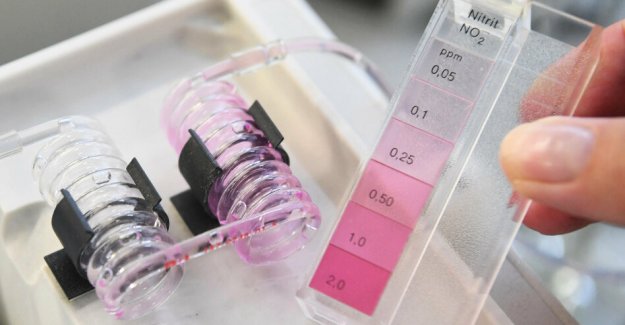 farmers want to demonstrate, however, that Germany have reported to the EU "misleading measurements". Experts are saying: The allegation is not true.

measurement with a flow-Through photometer: the darker the color, the more nitrate in the groundwater photo: Uli Deck/dpa

BERLIN taz | scientists, the criticism in the call of the planned farmer's demos have rejected the statistics on the pollution of water with nitrates from nitrogen fertilizers. Unlike the farmers, the Initiative "Land connection" is claimed to have Germany reported "misleading nitrate values in the EU," said Martin Bach, agricultural scientists, and nutritional expert at the University of Giessen, the taz.

"The values. Whether they are representative for the whole of the Republic, plays no role,“ says Bach. Because the nitrates and the water framework Directive, the EU required that all bodies of ground water contain less than 50 milligrams of nitrate per Liter. "As long as only a body of groundwater is located in, Germany must reduce the nitrate load in there. Regardless of the measurement network is used, there are in Germany more than 200 measuring points, which are above the limit,“ said the scientist. Friedhelm Taube, agricultural Professor at the University of Kiel, confirmed Bach's information.

nitrate from manure is potentially harmful and contaminated the ground water from which most drinking water is obtained. In the environment too much fertilizer to the extinction of plants and animals contributes to the species as well as climate change. In addition, a high money penalty, the EU threatens Germany because the nitrate limits will always be exceeded again. Therefore, the Federal government plans to limit the application of fertilizer, especially in particularly polluted areas stronger. Finally, most of the nitrate come from, according to the experts from the agriculture.

Depending on the measurement network, the proportion of the measurement varies over the limit, according to Bach, but from 18 to 49 percent. In addition, Germany has, in comparison to most other EU member States per hectare of little measurement. For these reasons, the movement "the country connection is" in the call to demonstrations on Thursday writes: "The Federal Republic of Germany at a disadvantage its own farmers against the European competitors. It is misleading of nitrate have been reported to the European Union.“ The Federal government should take back your nitrate reports and the fertiliser application Ordinance to be suspended.

not But on the international comparison in the EU-Directive "on the protection of waters against pollution caused by nitrates from agricultural sources". Also, the proportion of severely stressed measuring points, you mentioned.

Instead, they require States 'action programmes' for all surfaces, which pollute water bodies or compromise. The readings should show how these steps work, according to researchers at Bach. "You do not need to determine the Status of the groundwater as a whole. It is the changes in contaminated ground water rich bodies.“

This is the basis for the lawsuit at the EU court of justice: "In all measuring networks of the proportion of contaminated areas has fallen only slightly," says Bach. That's why the EU Commission is of the opinion that the German measures had too little.

Professor dove added that the criticism of the farmer's initiative on nitrate monitoring network, and their demand for the withdrawal of the fertiliser order "are lacking in any serious basis". "These expectations are backward-looking, not goal-oriented and to foresee the solidarity of the society in question," says dove. His research group, like many others, for more than 25 years after that 20 to 40 percent of the plant captured nitrogen, the nutrient surplus, reached via the leachate into the groundwater, lakes, rivers or seas.

Dirk Andresen, spokesman of the "country connection", which brought the establishment of a farmer's party into the conversation. Although there was a wide political spectrum in Germany, "sensible agricultural policy" came into being, but, said Andresen, the Neue Osnabrücker Zeitung. "I do not exclude that we get together one day in the Form of a party," says Andresen. The movement did it, that thousands of people are engaged on a voluntary basis for agricultural policy. "This is a success. On the build could be.“ In the Netherlands, was gone from the local peasant movement is also a party.

Whether or not a peasant party in Germany, the hurdle would be about 5 percent, is unlikely. Because there are only about 270,000 farms and 62 million eligible to vote. Martin Hofstetter, agricultural expert at the environmental organization Greenpeace, tweeted, therefore, this "funny idea" would be from him: "Would weaken the conservative agrarian faction in the CDU and at the same time securely to a 5% hurdle fail," wrote the environmentalist.

1 Not pleasant, but possible: Seven ways from the private... 2 Buy or wait? Asset managers, explains the proper tactics... 3 Dax is recovering more strongly: index closes significantly... 4 The battle for employees: companies are building thousands... 5 15 cities, in which even millionaires are no longer... 6 Economic crisis in Lebanon: natural gas, Beirut should... 7 Rejection of the Grand coalition: an entrepreneur... 8 What are the markets moves today 9 Continental warns of billion loss from weak year -... 10 Petrol and Diesel as cheap as for a long time: a Question... Not pleasant, but possible: Seven ways from the private...