Night train traffic in Germany: a Wake-up call from the barn to the rail

in 2016, the state group made its sleeper cars. Now the Minister of transport will take you back into the game. This is likely to increase the pressure on the r 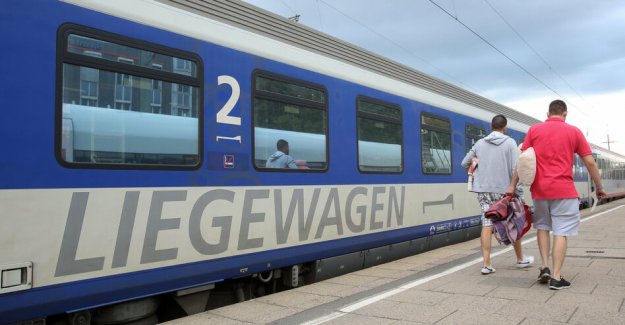 in 2016, the state group made its sleeper cars. Now the Minister of transport will take you back into the game. This is likely to increase the pressure on the rail.

Soon from the Deutsche Bahn? A wagon of the ÖBB spent at the train station Hamburg-Altona photo: Reuters

BERLIN dpa/taz | Three years after the withdrawal of the German railway from the night train traffic, the Federal Minister of transport, Andreas Scheuer (CSU) holds, a correction is conceivable. "I am in favour, in principle, open to all," said Federal Minister of transport, Andreas Scheuer (CSU), the German press Agency on the question of a possible re-entry of the state group. He reference to ongoing discussions with the state Railways of Austria and Switzerland.

could engage In any Form of the Deutsche Bahn, but it is still unclear. It's not a quick shot, help Scheuer said. "When we deploy again, night trains, we also need the corresponding trains."

The train had, however, made for the new year, clear that there is currently no private deal with the classic sleeping cars and couchettes had planned. The Federal Minister of transport, positioned now open, is expected to raise the Federal government's own group, the pressure to rethink his attitude. The railway had for you to their own information, deficient sleep, and the car business 2016 Sun submitted to the Austrian Federal Railways (ÖBB). The Austrians invest in the business, and were the last new trains to build.

ÖBB your night trains through Germany, Italy, Switzerland and Austria, from mid-January to also to Brussels. 2019 passenger numbers by about 10 percent, a spokesman said. ÖBB is generated so that a slight Plus. With one and a half million customers it remains a niche business, the group chief Executive Andreas Matthä but be on the lookout for further growth opportunities.

Against the Background of the climate debate, the Swiss Federal want to increase more and more night trains and the cooperation with the ÖBB, a spokesman said. Zurich is the second largest hub for night to Vienna train rides in Europe. New routes could also run through Germany.

Deutsche Bahn can be your customers, meanwhile, at night, in the Intercity and ICE in the Sit travel. "In addition, the DB AG supports the classic night train services from other providers, for example, with locomotives, with staff, as well as in sales", replied the railroad Commissioner of the Federal government, Enak Ferlemann, to a request of the FDP group in the Bundestag. "In this two-part strategy, the DB AG will hold."

The FDP-transport policy-makers Oliver Luksic criticized: "In Germany, the train was asleep, in Austria, the customer – and is still well-rested and on time to your destination." The railway is to take part in the ÖBB as an example. "Especially in the upscale Segment of the travellers' comfort is paramount and the night train with sleeping cars an attractive Alternative to the plane." Exciting about a connection between Berlin and Paris would be in favour of – who had set the track 2014.

Scheuer said: "The crucial question is: What car makes driving more attractive?" The comfort had to be better. "How can I use the time best, when I'm driving, for example, from Passau to Berlin? Can I use this for five and a half hours at night to relax me, or I prefer to drive during the day and use the time to work?“

After Ferlemanns information, Deutsche Bahn had sold after 2016 your remaining 81 sleeping car. How expensive it would be, in the night, the train business again, he could not say. For the special vehicles, workshops and cleaning facilities need to be rebuilt. "For this purpose, high investments would be needed."