OPEC wants to cut up to 1.5 percent of the global production

The oil cartel Opec has also given the novel Coronavirus a difficult session on its future production strategy. The competent Ministers of the 14 States have be The oil cartel Opec has also given the novel Coronavirus a difficult session on its future production strategy. The competent Ministers of the 14 States have been discussing today, Thursday, about possible new funding restrictions, after the price of Oil has recently come under pressure.

The International energy Agency (IEA) has estimated that for the first time in ten years, the demand for crude oil will decrease, the Opec has revised its demand forecast down. A sharper funding limit seemed inevitable.

And indeed, the Opec calls according to a communication from a funding cut of 1.5 million barrels (each 159 litres) of Oil per day for the second quarter. A Million barrels to save the 14 Opec countries, 500 000 barrels of the ten cooperation partners, including Russia. The reduction would correspond to a total of around 1.5 per cent of global Oil production. If Russia agrees to this, is questionable.

tomorrow, Friday, to advise to the Opec countries with its cooperation partners on the proposal.

the price of Oil is significantly

like The Opec and their partners are under a lot of pressure, because the spread of the novel Coronavirus has resulted in economic problems. In the past few weeks, the price of Oil has fallen significantly: For the new year, the price of a Barrel of North sea Brent crude oil for more than 65 dollars was, on Thursday morning, he, in contrast, was $ 52.

The Opec+ has been trying for three years to stabilize funding limits, the price of Oil. Especially Saudi Arabia has a great interest in a significantly higher Oil price. db Oil price Brent 50,91 USD -0,81 (-1,57%), except over-the-counter

To put the price data

However, Opec and its partners are in a Dilemma, Cyrus de la Rubia, chief economist at the Hamburg Commercial Bank explained. "If you cut a lot, you will not believe that the countries are disciplined and stick to it. If you cut too little, it will have no impact on the market."

A Committee of the Opec and their ten cooperation partners of the Opec+ had recommended in mid-February, to promote 600 000 barrels (each 159 litres) of Oil per day less. The strong economic impact through the novel Coronavirus have been only a few days later, and a reduction in this magnitude could end up as a small drop on a hot stone.

finally, the relevant energy and oil Minister in December, sharper restrictions: The 24 States currently intend to promote to 1.7 million barrels per day less Oil than in October 2018. Add to this a voluntary reduction of 400 000 barrels per day, which is solely funded by Saudi Arabia. In January, the 14 Opec countries promoted 28.9 million barrels of Oil per day - the equivalent of almost 30 per cent of the world's Oil production.

The current funding limit is since the beginning of the year, but missed due to the unexpected impact caused by the new Coronavirus is the intended effect: Despite the reduction in the price of Oil went in the knee. With the SCC-exchange of letters next to values, and in the short term and the long term Top return on investment! (Partner quote) Here is an exclusive 30-day free trial!

A new reduction in subsidies is almost inevitable. The world economy would help, but not necessarily, says de la Rubia. "You could also say: We do nothing. The price of Oil back then, including the would then suffer, but also, for example, the Fracking opponents in America. The world economy could come so maybe a little faster on the legs, and the market share of Opec would not shrink." This strategy appears to be currently, but as very unlikely.

The novel Coronavirus has not only an impact on the strategy of Opec, but also to the conference itself: The oil cartel decided not to let the media for the sake of safety to the buildings in Vienna, the number of delegates should be kept small.

also read: failures up to the end of March - Lufthansa cancels over 7,000 flights due to Corona Virus - what is the Compounds true real-time map shows the Corona-dissemination - more than 45,000 people were being healed, again, FOCUS Online/Wochit lung disease Covid-19: real-time map of the Corona-dissemination - more than 45,000 people shows a re-healed

1 Coronavirus and financial crisis: A Virus is not a... 2 Economic crisis in the Middle East: No liquid Gold... 3 Total crash or Dent? The Top Economists say about... 4 650 employees affected: Real decides before the sale... 5 Lufthansa cancels over 7,000 flights due to Corona... 6 Heat and fires in Australia: the climate crisis, then... 7 Climate protection target for 2030: Now officially... 8 Tips from Tesla CEO Musk: How to get more out of Your... 9 Germany's climate goals: Long enough 10 Turbulence more go to: the Dax slipping just under... 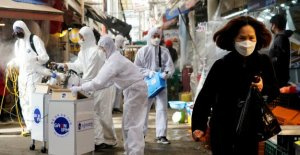 Coronavirus and financial crisis: A Virus is not a...