The car-sharing service Oply provides its service in Germany on 27. February. The provider was represented according to its own information, with a total of 510 The car-sharing service Oply provides its service in Germany on 27. February. The provider was represented according to its own information, with a total of 510 vehicles in Munich, Hamburg and Berlin, and had more than 60,000 customers.

the reason for the withdrawal was a burst of funding, such as Oply announced on Tuesday in Berlin. "Despite high customer demand and strong growth in all three cities for the further operation necessary round of financing did not materialize," it said on justification.

Oply-Out after two years in Germany,

Oply followed a zone-based approach. The vehicles had to be in the area re-parked, in which they were hired. Other providers, such as ShareNow, a joint venture of Daimler and BMW, operate according to the so-called Free-Floating principle, so they can be in a different location turned off.

"Our zone-based car-sharing offer fits exactly in the time for financing it is currently but a bad Momentum", - said the head of the Luxembourg parent company Oply Mobility, Mauro Mariani. "In the last half a year the risk appetite to invest in new mobility has dropped significantly. Despite various meetings with Investors was achieved, with no Partner to an agreement.“

Oply was launched in Germany in March 2018 in Munich. The Oply GmbH takes a total of 50 employees in Germany and Luxembourg.

1 Protests in front of the Siemens annual General meeting:... 2 Coronavirus spreads: 1,000 beds in ten days 3 Significantly fewer accidents than you might think:... 4 The Lira before the new turmoil? Turkish Inflation... 5 Money is so casual: experts warn of disappointment... 6 Reporters on covert Research: business model climate... 7 10 billionaires who has made the fight against climate... 8 Because Coronavirus: Hyundai's total production in... 9 Five models are available: As the chief supplements... 10 Fear of car city in the forest: How Tesla in green... 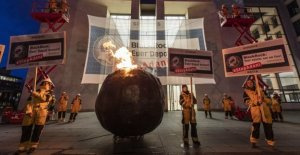 Protests in front of the Siemens annual General meeting:...