Per share intend to pay for the French 29 euros, the company said on Thursday. Which is the equivalent of 51.9 million shares at a total value of around EUR 1.5 Per share intend to pay for the French 29 euros, the company said on Thursday. Which is the equivalent of 51.9 million shares at a total value of around EUR 1.5 billion. "We are delighted to have Schneider Electric as a strategic Partner," said RIB-chief Tom Wolf, who is currently the main shareholder with almost 17 percent.

The proposed offer price is a 40 per cent above the share's closing price on Wednesday evening - on Thursday, the paper increased correspondingly by a good 41 percent to 29,16 Euro. The Plan to do strategically for the Schneider sense, wrote RBC Analyst Wasi Rizvi. The evaluation of RIB Software spent in the industry-standard range. RIB Software SE 29,16 EUR +8,54 (+41,42%) Xetra

RIB Software with headquarters in Stuttgart, is specialized, with over 2,700 employees in building software for planners, architects and construction companies, and focuses mainly on the Bausimulation and execution. Schneider Electric is in the electrical engineering and industrial automation strong. The group has worldwide more than 137,000 employees.

Schneider wants to expand with the acquisition of expertise in digitisation for the engineering and construction industry, as Chairman of the Board Jean-Pascal Tricoire said. In recent years, industrial enterprises are increasingly smaller software companies to get a foot in the door to attractive growth areas, because the clientele of converts in the direction of digital technologies. So, among other things, the Siemens group has handles reinforced with software companies.

In a joint telephone conference with the Manager of the company made it clear that they speak with the same customer. Schneider Electric had acquired a few years ago the UK-based provider Aveva to industrial customers with a software base for the operation of your equipment. Now the French want to expand with the Acquisition of the offer for the construction industry. Material costs for the Integration of RIB Software are not to be expected, it was from the Schneider Management.

RIB-Board of Directors supports the offer

The Board of Directors of RIB Software supports the offer includes a minimum acceptance threshold of 50 percent. Supervisors of the project need to agree to still, even in the case of the US investment control, CFIUS is to be made according to Schneider chief financial officer Emmanuel Babeau an application. The completion of the Acquisition, the company expected in the second quarter of this year. Schneider wants to support the growth of a RIB, it said. A domination or profit transfer agreement is not currently planned.

for some time now, a Takeover of RIB Software is in the conversation. Already in the middle of last year, the boss Wolf had made it known that he speaks with investors on a new strategy. Wolf is also the main shareholder of the company. He and chief financial officer Michael Sauer to hold the transaction together almost 9 percent of the shares. Up to the end of their contracts in 2022, the Manager will stay on Board. So far, Wolf has with his family nearly 17 percent. Schneider has already secured access to 16 percent of the shares.

Stuttgart have grown in 2019, strongly - profit increased by a third

RIB has gained in the past year was another year of strong growth. Sales climbed 57 percent to 214,3 million euros, as the values in the Small-Index, the SDax-listed company on Thursday in Stuttgart announced. The earnings before interest, taxes, depreciation and amortisation rose by 32 percent to 50.1 million euros. At the end of January raised the forecast for the new year, the group confirmed.

1 Agriculture Minister wants to legalize cages: Protest... 2 Nuclear, coal, Gas, Wind, Solar: What type of current... 3 Ex-Minister of transport in the U-the Committee: Clearly... 4 47 million given away? Diary of a Hamburg Banker brings... 5 Despite profit jump: Linde make announces removal... 6 Aldi sells soon Top Smartphone from Samsung - even... 7 Seasoning for the Depot: Why smart investors 2020... 8 Tesla is now planning a capital increase to astronomical... 9 New property in Beverly Hills: Jeff Bezos buys luxury... 10 In the case of the wrong Agency termination of Air... 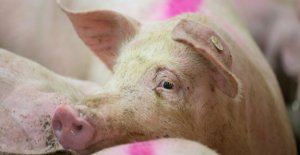