Strike at Germanwings: About 180 flight cancellations - what you need to know now

No all-clear for passengers of Germanwings: 180 start will cancel the Airline on Monday, Tuesday and Wednesday at German airports because of a strike of the fli No all-clear for passengers of Germanwings: 180 start will cancel the Airline on Monday, Tuesday and Wednesday at German airports because of a strike of the flight attendants is expected. The Overview on the website of eurowings, which has updated the company until noon on Sunday.

Germanwings carries out its flights for eurowings. With the Chaos of the airports is not expected. "We do not expect significant impacts," said a spokesman of the düsseldorf Airport.

primarily intra-German Connections, but also some flights to Austria and Switzerland will be Cancelled probably. Especially the airports of Cologne-Bonn, Munich, Hamburg and Berlin-Tegel are affected. Often there are alternative routes, on which many travellers would be transferred, it says.

Germanwings leads your flights for eurowings. The Lufthansa subsidiary Germanwings is according to group data with 30 flight and 1400 employees - including 800 in the cabin - for the successor to the brand Eurowings on the road, but should be prospectively merged with the eurowings-flight operations. A private brand image it is no longer there.

The strike at Germanwings lead throughout the Eurowings flight plan to about 15 percent, flight cancellations, said a company spokeswoman, the German press Agency. "Out of the planned 1200 flights in the strike period over 1000 to be carried out."

What have travellers flying with Germanwings now

know Before you travel should inform passengers about the Status of your flight. For example, on Eurowings.com or the App of the Airline. Here you will also find the special flight schedule of Germanwings.

Is deleted from a flight, the Airline offers travellers Alternative as soon as contact details are stored. Cancelled flights can be rebooked at Euro wings for free. For domestic flights, travelers can convert the ticket into a train ticket of the German railway - or have the ticket price refunded.

"you Should have booked your flight through a tour operator or a travel Agency, please contact the organizer directly or the travel Agency" reports, the Airline further.

your flight was cancelled? These are the Alternatives (display)

The deal What is the possibilities Germanwings-now?

Is too late of a flight, travelers have, in many cases, the right to compensation. Whether passengers too in case of a strike, is controversial. The Supreme court decided in 2012 that a pilot strike, for example, is an exceptional circumstance - so travelers for delays and cancellations will receive no compensation.

The Airline must do everything in their Power to minimize the consequences of the Strike - for example, by using a special flight plan.

three-day strike: This is the reason

After failed preliminary to arbitration, the cabin Union Ufo called on Friday the flight attendants of Germanwings to the three-day strike. The recusal should last up to and including new year. The official reason is a dispute, the trade Union with the employer rules for part-time is.

In this point, the Germanwings a drew then on Saturday, via press release, the strike at the last Moment to avert. For a short time a cancellation was in the room. Ufo spokesman Nicoley Baublies told the German press Agency: "this Should actually help, we will cancel the strike."

But it did not help: Within a few hours, the Ufo replied that they keep the strike solid. In a Letter to its members, which is present the German press Agency, informed the Ufo decided on Saturday evening: "The tariff Commission has (...) that on this Basis, neither legally, nor factually, nor for any reason of the strike is canceled can be."

Germanwings had not offered employees the required own collective agreement, part-time, but part-time arrangements in the Lufthansa. But don't want to Ufo.

"Three days is not long enough"

In the Letter to their members, the trade Union declared that it had made clear demands, they also would continue to negotiate, "but to no response except this polemic was unfortunately press release".

In this communication, it was said that Germanwings will offer "the collective agreement part-time Lufthansa in full and with immediate effect". According to Germanwings, the announced strike of the Ufo is formally stated basis was devoid of with this quote "".

The Ufo is not retained but only the call for a strike, but went a step further: "Quite to the contrary, we fear, the communication of the management is that three days will still be long enough."

About the Director Francesco Sciortino was upset, Germanwings on Sunday in a Tweet the eurowings Accounts: part-time is already for years a lived practice in the company, 2019 had been implemented for around 800 flight attendants, almost all part-time requests, except for eleven. To break "for eleven rejected part-time applications for a three-day strike by the fence, is unique in the German collective bargaining history," reads the Tweet.

In the conflict, it has already given you a warning strike for four-Lufthansa-daughters, as well as a two-day strike at the core company Lufthansa. Here, some 1,500 flights had been cancelled in November, with around 200 000 affected passengers. Asteroid could pose a danger to earth: "Bennu" spits exploding particle PCP Asteroid to earth could be dangerous: "Bennu" spits exploding particles

1 Discussion Böllerei the end of the year: fine dust... 2 Speed limit on highways: pure delay tactics 3 Waiver as a Maxim of Life: the possession is a burden 4 Nutrition in the new 20s: 20 Euro for the Sausage 5 German jobs miracle: Federal Republic of Germany depends... 6 These insurance policies you really need 7 The dispute on clean air in Munich, Germany: ECJ does... 8 Pensioners, trainees, apprentices and workers: Who... 9 Insurance: customers save with net policies of thousands... 10 Government plan: citizens to make passport photos... 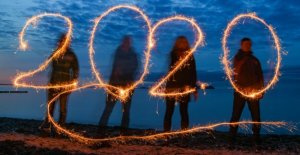 Discussion Böllerei the end of the year: fine dust...