ANNOUNCEMENT: 1,400 children welcome the author of "Los Futbolísimos" at the Caja Mágica 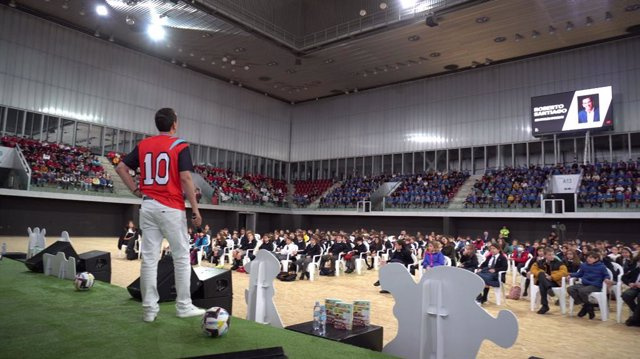 The Futbolísimos and the mystery of the World Cup in Africa is the 22nd installment of this successful children's saga published by SM.

The author has sold more than 4 million copies in Spain and has become the most widely read author in the Children's and Youth Literature category.

Madrid, November 4, 2022.- The Caja Mágica yesterday received 1,400 schoolchildren from Madrid who enjoyed a super-encounter with the author of "Los Futbolísimos", the saga of the best-selling writer Roberto Santiago. The date of the event coincided with the delivery ten years ago of the first manuscript that made the writer, years later, the best-selling Spanish author of Children's and Youth Literature.

From the stands of the Caja Mágica stadium, the children learned first-hand about his latest novel: Los Futbolísimos and the mystery of the World Cup in Africa. This is the 22nd installment of this SM children's collection that combines football and mystery and shows that children are great readers.

SM's successful children's collection has sold more than four million copies in Spain and has been translated into more than 12 languages.

Together with Roberto Santiago, the young readers solved enigmas, discovered the writer's creative processes and demonstrated that they knew better than anyone else the plot of the novels and their characters. They were also able to enjoy a demonstration by Paloma Pujol, professional freestyler and footbag world champion, a discipline that consists of touching a ball filled with seeds or sand with your feet without letting it fall to the ground. Pujol played the character of the Moratalaz panther in the musical Los Futbolísimos, with great success on tour throughout the national territory.

The author of the renowned children's saga has turned nine boys and girls who play soccer and solve mysteries into a literary phenomenon with millions of followers around the world. His last book testifies to this, since it has been written by Santiago with the help of his readers. This is his second interactive novel, in which the children have decided week after week what happened in each chapter through their votes in the AS newspaper.

Link to pictures of the event

Roberto Santiago (Madrid, 1968) is currently the best-selling national author in the category of Children's and Youth Literature, thanks to adventure collections such as Los Futbolísimos and Los Forasteros del Tiempo, by SM, which have five million copies sold in Spain.

He is also the author of novels for adults; among them, Ana, which he adapted for television in Ana Tramel, with Maribel Verdú as the protagonist. In addition to being a screenwriter for television, theater and cinema, he is a director. As a football fan, he has poured his childhood dreams into this sport in his films Iván's Dream or The World's Longest Penalty.

As a playwright, he has adapted The Other Side of the Bed and Eight Basque Surnames, as well as the original texts Share 38 (Enrique Llovet award), Naked (second prize at the SGAE Awards), Women's Happiness, Topos, Lady Chatterley's mole, The prodigious bar and Adolescer 2055, which SM has published as a youth booklet.

The Futbolísimos 22. The mystery of the World Cup in Africa.

Synopsis: The Futbolísimos are already in Africa, ready to fight for the title of champions against the best in the world. What they do not expect is that a visit to the boys and girls of Ciudad Esperanza will change everything, including the Soto Alto team itself, which will never be the same.

This book is the 22nd volume of the successful SM children's collection and includes illustrations and chapters in comic format. This is the second interactive novel by Roberto Santiago in the saga, which has been written with the help of its readers, who have voted week after week how they wanted the story to unfold through the AS newspaper.

1 Industrial production moderates its growth in September... 2 ANNOUNCEMENT: Torta del Casar awarded again at the... 3 ANNOUNCEMENT: Sheila Casas stars in the latest Catchalot... 4 ANNOUNCEMENT: Allianz Partners registers more than... 5 Escrivá rules out retirement at age 70 and says that... 6 The Supreme Court will study whether the municipalities... 7 The Government rejects the possibility that the banking... 8 Lagarde sees a greater risk of recession, but assures... 9 Abertis earns 506 million euros until September, 2%... 10 ANNOUNCEMENT: KINDER JOY OF MOVING TENNIS TROPHY INTERNATIONAL... 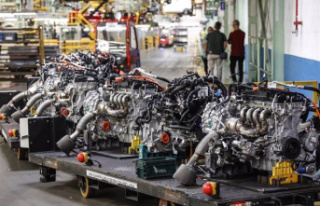