COMMUNICATION: The IVAJ analyzes the challenges of youth and the new models of masculinity in the 'Congrés de Joventut' 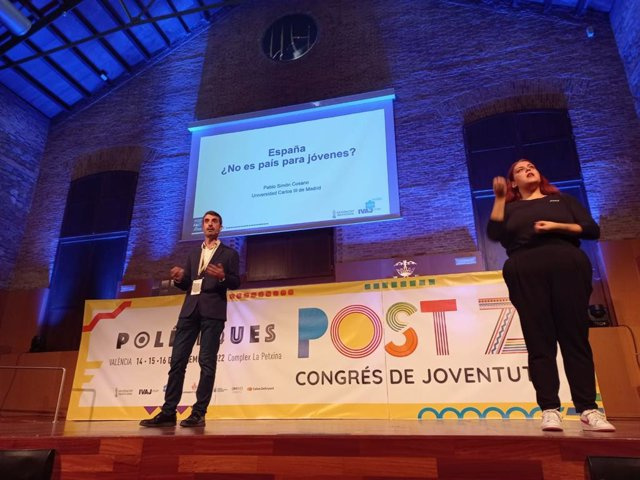 The political scientist Pablo Simón and the deputy director of the FAD Anna Sanmartín have given two of the presentations on the second day of the congress. Poverty, emancipation, the labor market, the educational system and the welfare state are some of the major issues that have been addressed

The Institut Valencià de la Joventut (IVAJ) has brought together a multitude of professionals and youth representatives from all over the Valencian Community for another day at its congress to analyze youth policies and establish the Valencian youth strategy with an eye on the 2030.Pablo Simón, a political analyst and professor of political science at the Carlos III University of Madrid, has participated in today's conference, explaining during his presentation that young people are today the face of poverty in the country. In fact, child and youth poverty is much higher than that of those who are over 65 years old. In addition, young people are still in a very difficult situation to find stable jobs and their residential emancipation is a real challenge that is aggravated in a crisis situation. All of this influences the development of their potential and makes the new generations the most affected by crises. However, the professor wanted to end his intervention with some hopeful aspects. For this reason, he stressed that youth issues are increasingly having an impact on the agenda, that Spain has improved in terms of training (investment in vocational training, a drop in the so-called ninis, a decrease in early school leaving), it has also improved in labor market dynamics and more minimum income policies are being developed. Although, housing is still a pending issue. In addition, the deputy director of the Foundation for Helping Drug Addiction (FAD), Anna Sanmartín, who presented the report 'Young people before the masculinity fund', also participated in the conference. The professor has explained the concept of the box on which the study is based as a metaphor for traditional hegemonic masculinity. To then expose some of the first conclusions that have been drawn from the report. In this sense, Sanmartín pointed out that the majority of men and women reject the traditional values ​​represented by the box of masculinity, since the value of equality and awareness of gender inequality are widespread among youth. However, men still position themselves much more than women in positions close to patriarchal ethics and the ideas of traditional hegemonic masculinity. As far as the Valencian Community is concerned, the same trends are observed as at the national level, although in In the Valencian case, there are even more conservative views among the men inside the box. Lastly, Sanmartín stated that the approach to traditional hegemonic masculinity also supposes highly worrying and harmful constructions about the violence of men towards women, by trivializing it, denying it and, ultimately, legitimize it.