COMUNICADO: Qatar: Rich, Modern and Cosmopolitan – What about Animal Welfare?

The Football World Cup is coming. Doha is being brightly polished. The sophisticated city wants to impress and is welcoming its guests. Visitors experience the country and its people as cosmopolitan. But Qatar is a country of contrasts. The internationally operating animal welfare organization Animals' Angels encounters these contrasts during its recent investigation.

Animal welfare is of no significance in Qatar. Animals are simply considered consumer goods. On the tourist market Souq Waqif, animals of all kinds and origin are for sale: Huskys, parrots, and turtles are stacked in small terrariums. Buyers typically use them as garden decoration, as a pastime or as toys for their children. Shortly afterwards, these animals are usually given away to the overflowing animal shelters. Horror stories circulate about the state-run animal shelter.

But the so-called 'farm' animals are no better off. Qatar imports them from almost all over the world. The animals arrive by truck, ship, or plane. Many of them end up at the slaughter markets. The animal handlers at the markets have no training. Animals are regularly injured or sick and left to their fate.

At one market, the Animals' Angels team meets Ulrike and Elisa, two cows from Germany. Both are miserable: Ulrike is extremely thin. Her ribs and hip bones are boldly visible. Her face shows severe pain. Elisa can hardly walk. Her right front leg is injured. Her overlong claws indicate neglect. The next day, the two cows are brought to the slaughterhouse. The veterinarian there is unaware of the glaring animal welfare problems.

Qatar wants to be a modern country, with good education and a high standard of living. Furthermore, it is one of the richest countries in the world, yet it has no animal welfare law. To meet its own high standards, Qatar cannot continue to ignore animal welfare. 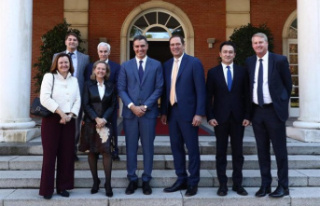 Cisco will locate its new chip design center in Barcelona