Macri, forced to ask for more money to the IMF to ward off the growing specter of the default Bread and circus in an Argentina that collapses

Each time that Mauricio Macri issues a recorded message, Argentina trembles. The representative conservative it took only less than two minutes to inform nation that her government has renegotiated bailout requested in may to International Monetary Fund (IMF). To ward off ghost of "default" (suspension of payments) and to distrust of international markets, Macri agreed with multilateral agency an advance of "all funds necessary" to face millionaires debt maturities in 2019.

The lifeguard that IMF launched him to battered economy of argentina was biggest financial rescue in history of agency that directs Christine Lagarde: 50,000 million dollars until 2021. In June I released 15,000 million and agreement provides for disbursement of about 3000 million every quarter. But serious crisis in Argentina has revived suspicions of a few international markets which in may closed faucet to country by greed of financial of a government that issued debt for 100,000 million dollars from Macri came to power in December 2015.

to calm down your creditors and put an end to rumors about possibility of return to country specter of "default", Macri is entrusted again to IMF, its sole financial support: "The last week we have had new expressions of lack of confidence in markets, specifically on our ability to achieve funding for 2019. For this reason, I would like to announce that we have agreed with International Monetary Fund to proceed with all necessary funds to ensure fulfillment of financial program of next year. This decision aims to eliminate any uncertainty that had been generated around with deterioration of international context."

The announcement of Macri has as its first target of halting unstoppable devaluation of argentine peso, whose value against dollar has fallen 43% since beginning of year. A collapse that has worsened in recent days and that continues to fan fire of inflation, great Achilles ' heel of argentine economy. When he reached Casa Rosada, Macri promised that inflation chronic in country would not be a problem in ir government. But prices have not stopped climbing. Most of consultants estimate an inflation rate of 35% to end of year in a context of recession (of -1% of GDP) assumed officially by Executive.

To contain leakage of dollars -a tradition argentina- Government of Macri has tried to stimulate tenure of pesos with interest rates high (45%), a measure that is paralyzing economic activity and stifling to small and medium-sized companies, unable to be financed at those rates.

Although Macri didn't go into details about advancement of funds of IMF, its intention is to have sufficient liquidity to meet financial needs of country in 2019 (8,000 million dollars, according to Government, and up to 20,000 billion according to private consultants). The president, for whom Argentina is in midst of a storm international, is aware of who is staking his political future in coming year. All of surveys coincided until April that coalition ruling Change revalidaría his triumph in presidential elections of October 2019. But crisis, which already affects to unemployment and increased poverty, has worn image of Macri, whose chances of re-election are now by inability of opposition peronist to overcome ir divisions.

1 Promoting calls to Ryanair at a meeting following... 2 Criticism of the German police by leaks about the... 3 The resignation of the minister of Ecology, a new... 4 Macron stands as quot;main opponentquot; of the axis... 5 The show failed Bruno Hortelano: far from its record... 6 Draw Champions League: Europe looks to Madrid 7 Classrooms: quot;15 days Ago Florentino Perez told... 8 quot;The Bolero Ravel is basque, rather than Spanishquot; 9 The verses of Elfriede Jelinek, an irreverent, very... 10 The last inspection of the stadium of the Ray, in...

Climate activist on Uganda: We need Fridays for NOW Chief market analyst, explains: investors do in a crisis, always the same error 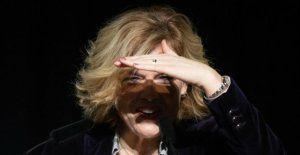 Minister Klöckners dealing with criticism: arguments are not hate speech As in the 19th century. Century: Reederei get Rum and coffee, with a sailing ship from the Caribbean
BREAKING NEWS HEADLINES Promoting calls to Ryanair at a meeting following...