"This year's index reflects the impact of the pandemic: from a decline in English proficiency among young people to an unexpectedly high proficiency outside of big cities, which has implications for remote work," said EPI author, Kate Bell.

The EF EPI is based on scores from the EF Standard English Test (EF SET), used by governments, companies and schools for large-scale testing, as well as by millions of individual test takers.

The main results are the following:

- English proficiency improved in adults over 25, with those over 40 seeing the most improvement. Dominance among 21-25 year olds has not changed, but has decreased in the 18-20 cohort since 2020.

- In Europe, the large countries bordering the EU have driven the region's growth. Europe is the only region where young adults have not lost ground.

- Central and South America continue to improve; but they have the largest score difference by age, with scores for the 18-20 year old cohort having dropped significantly since 2020.

- The Asian average fell due to declines in the Philippines and China, although most countries surveyed improved, with three moving up to a higher competition band.

- This year the gender gap has widened. Male proficiency in English continues to outperform female and this appears to be due to biased education systems or unequal access.

- Of the more than 500 cities measured, 130 did not outperform their region and another 130 barely did. This has implications for recruiting, given the shift to remote work.

- Africa and the Middle East remained stable. Results remain low across all ages in the Middle East, although the narrowing of the gender gap is a welcome development. Africa has some of the largest differences in competence in the world, both by age and gender.

EF Education First offers a culturally immersive education through language, travel, cultural exchange and academic programs in more than 100 countries. Founded in Sweden in 1965, EF's mission is to open the world through education.

1 ANNOUNCEMENT: yeedi Releases Holiday Gift Guide 2 Bit2Me and Shopify join forces to accept payments... 3 Soltec earns 4.5 million until September compared... 4 Digi shoots up 38.6% its income in Spain until September 5 First Drop VC was born with a goal of 25 million for... 6 Vodafone reduces profit by 1% in its first fiscal... 7 The EU agrees on a budget of almost 187,000 million... 8 Cellnex plummets almost 6% after CK Hutchison hires... 9 CALL: What do young people think about the "Crystal... 10 ANNOUNCEMENT: intu Xanadú kicks off Christmas with... 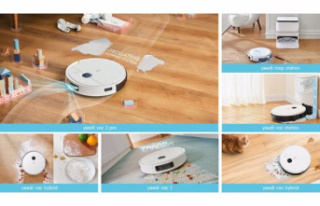