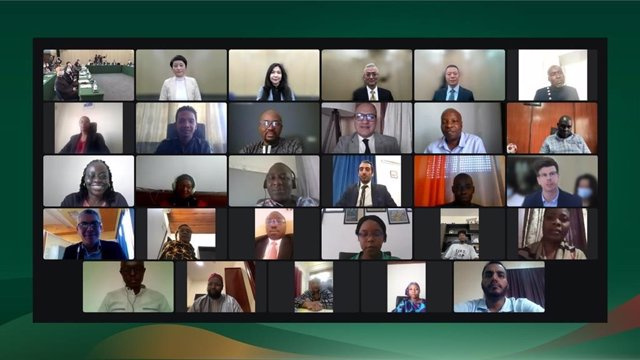 BEIJING, Nov. 15, 2022 /PRNewswire/ -- The sixth annual meeting of the Africa Link Union (ALU) was held in Beijing on Monday, bringing together 26 media representatives from 19 countries and regions to help strengthen the Media cooperation between China and Africa.

In his opening remarks, Teng Yunping, president of CCTV, warmly welcomed attendees from across the African continent, saying China-Africa media cooperation has played an essential role in fostering China-Africa relations.

The All Media Service Platform (AMSP) Cooperation Agreement was also signed at the meeting between Teng Yunping, Chairman of CCTV, and Ousman Abdelmoumine Bechir, CEO of Tchad 24.

Song Jianing, Deputy Director of China Global Television Network (CGTN), said, "To better aggregate the news content of the world's major media outlets and create effective and diversified international cooperative media outlets in depth for a long term, CGTN is willing to provide African media partners with more public products in the future, and to carry out closer exchanges and cooperation."

"CCTV plus has become an important source of news content for our station," said Susan Ng'ong'a, CEO of Kenyan station Switch TV.

"Switch media looks to continue building alliances within the African Link Union through the creation of a world-class product of professional news content and strengthening the association for years to come," he said.

"Thanks to China Media Group, CGTN, CCTV for the collaboration. We have learned from you, we have adapted to new working methods, such as the AMSP platform, for example," said Martin Ngningaye, CEO of Afrique Média from Cameroon. He stated that audiovisual content exchanges have allowed the public to discover the truth about China and better understand the splendor, cultural diversity and tourist attractions of the respective countries, and above all realize the neutrality and rigor in the treatment of the information.

The media representatives also shared their views on the coverage of major international events and their future plans for cooperation between the Chinese and African media following the 20th National Congress of the Communist Party of China (CPC), as well as the further development of the ALU at the meeting.

The event also announced the winners of the 2021 to 2022 ALU News Awards, which honor members who have made outstanding contributions to the development of the cooperation platform over the past year.

The ALU was launched by CCTV and media organizations from all over Africa in 2016, with the aim of promoting China-Africa media cooperation and exchanges.