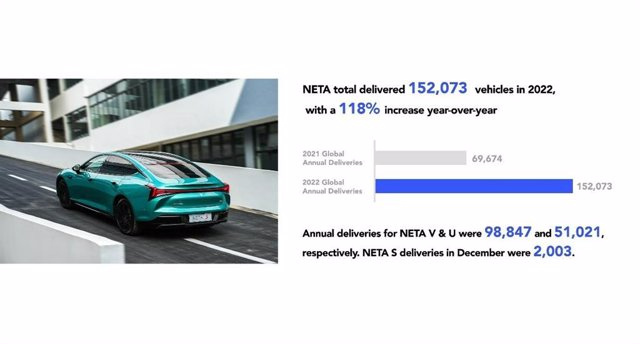 SHANGHAI, Jan. 4, 2023 /PRNewswire/ -- Neta Auto, a Chinese electric vehicle start-up, made steady progress in 2022, with huge changes in brand, product, sales, technology, channel and expansion abroad. It moved towards a new and upward development. On January 1, 2023, the brand shared its 2022 sales data. It accumulated 152,073 units sold in 2022, 118% more than in the same period of the previous year, representing a year-on-year increase for the 29th consecutive month. It also becomes the first Chinese EV company to sell more than 150,000 vehicles per year. 3,456 of them were delivered to foreign customers. As of the end of December 2022, Neta Auto had delivered 248,050 units. It spent just eight months selling 100,000 vehicles for the second time, five times faster than it sold 100,000 units for the first time, a new record among EV startups in China. Sales in 2022 accounted for 61% of Neta Auto's total sales since its creation, demonstrating the unstoppable development of the brand.

Neta U and Neta V annual deliveries were 51,021 and 98,847, respectively, in 2022, up 155% and 99% year-on-year, respectively, suggesting continued brand dominance in the all-terrain SUV segment. electrical. 2,205 units of the Neta S have been delivered in 128 cities in China, since delivery of the sporty model began in late November 2022.

Neta Auto intensifies its efforts to improve its global presence

Taking advantage of being the first company in China's intelligent electric vehicle industry, Neta Auto launched its "globalization" strategy in 2022. The brand chose a suitable path for global development based on its own advantages in intelligence and electrification and in the local market situation. It has established strategic partnerships with top-tier companies and has redoubled its efforts to gain a foothold in the ASEAN market as well as develop the EU market. Neta Auto has also expanded its presence in some countries in the Middle East, Australia and New Zealand. The brand has established a subsidiary in Thailand and a business unit in Europe, and has launched three international versions of Neta V and Neta U for overseas markets. It has set foot in ASEAN, South Asia and the Middle East. 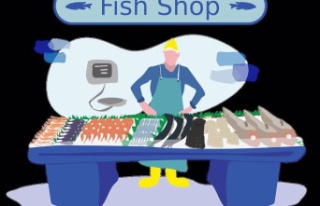