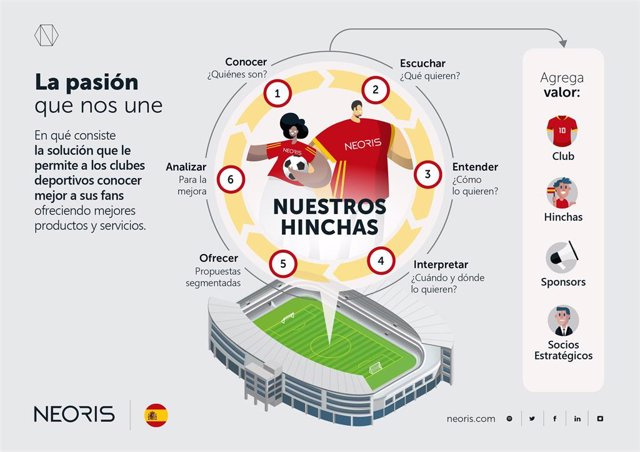 With the start of one of the most important sporting events of the year, NEORIS has developed a technology that will help clubs to reinforce the conversion of their fans

Soccer is a sport that moves the masses and rakes in huge amounts of dollars a year. According to Statista, during the last World Cup in 2018, FIFA claimed to have exceeded 4.6 billion dollars, more than double the income reached by the World Cup in Brazil in 2014.

A large part of this collection was generated thanks to the sponsorships that appeared on the players' shirts, or on the banners where the first interviews with the media were carried out after the game ended. These profits not only benefited the championship in general, but also the national teams, clubs and even relevant local leagues.

On the occasion of the recent start of the World Cup in Qatar 2022, NEORIS has promoted a Data Driven model to strengthen the bond that the teams maintain with their fans and boost the business of sponsors. Through this application, the global digital accelerator with more than 22 years of experience in the technology sector seeks that the strategic decisions made by the clubs are based on the analysis and interpretation of data. "We know that soccer is a sport that unites and moves many people around the world, which is why we are implementing a Data Analytics strategy to process the huge amount of information they handle, and make the most appropriate decisions so that fans can be identified, monetized and retained. In this way, we offer added value to sponsors, boost the business of the clubs, and generate new benefits for the institution", affirms Cristina Valles, general director of NEORIS Spain.

In this line, the directive highlights that the teams generate inexhaustible sources of data through interactions on social networks, browsing online stores, attendance at matches and Internet searches. However, there is a problem that these clubs have been facing for years: they are unable to take advantage of their full potential.

"The value of information is incalculable, so if we want to use all this data efficiently it is necessary that it be presented as clearly as possible. For this reason, at NEORIS we have developed dashboards and strategic insights for the business in real time , allowing the decision-making process to be more agile in order to achieve some of the proposed objectives, such as conquering new audiences, optimizing the sale of advertisements in their e-commerce, or seducing new sponsors", says Cristina Valles.

The NEOIRS World Cup Qatar 2022 data analysis application offers several possibilities, including the possibility of presenting the user with the general statistics of their team – games won, performance and players injured – after a simple search of the name from your team on Google. "With a Data Driven strategy, FIFA can find out the location or tastes of the fans, and offer them, for example, Messi's best plays through social networks", concludes Cristina Valles.

NEORIS has already implemented this Data Driven model in soccer clubs, tournaments, and competitions in Spain, Mexico, and Latin America with very good results: it tripled the average income from mobile users in personalized ads, increased ad sales by 200%, and increased 10% monthly digital subscriptions and 80% users in new marketing campaigns.

About NEORIS NEORIS is a leading global digital accelerator, with more than 22 years of experience, that helps companies and organizations from all over the world to take the leap towards innovation, through the design and implementation of disruptive and sustainable solutions to develop their activities more efficiently, competitively and at lower cost. Headquartered in Miami, Florida, NEORIS has operations in 14 countries in the US, Europe, Latin America, and India, and has more than 300 active clients—most of whom are Fortune 500. Among its global partners, it counts industry giants such as Microsoft, Amazon, Oracle and Salesforce. Learn more at www.neoris.com, LinkedIn, Facebook or Twitter. 3 Reasons Why Outsourcing Can Help You Scale Your...