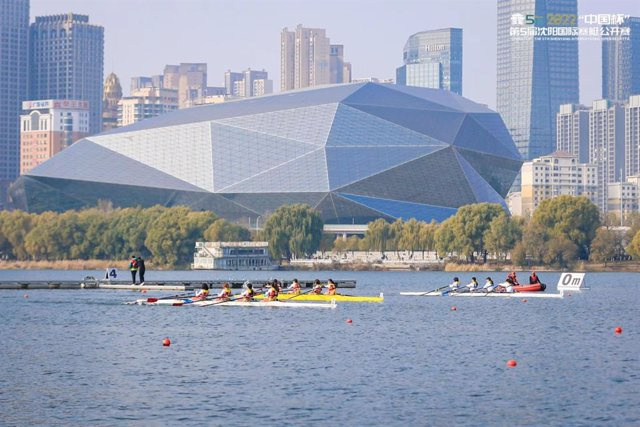 BEIJING, Nov. 10, 2022 /PRNewswire/ -- The 5th International Open Rowing Citizen Regatta was recently held in Shenyang, capital of northeast China's Liaoning Province, as part of the implementation of the national fitness strategy of the city ​​and the promotion of sport.

"Through excellent high-level design, the expansion of rowing sport, the strengthening of the rowing industry, and the formation of rowing culture, we will speed up the deep integration of the sports industry and urban development, and then we will make rowing become a new form of national fitness, a new driving force for building Shenyang in health, a new fashion of social life, and a new engine for economic growth," explained Liu Kebin, head of the Shenyang Municipal Sports Bureau.

The most distinctive feature of this forum is that the invited speakers are not industry experts, but simple rowing fans.

Xia Nan, from a local rowing club, recounted the changes rowing brings to children's growth, parent-child relationships and family life, with her two children on the path of parent-child dialogue.

Liu Yue, director of the international department at Northeast Yucai School, a local high school, stressed the importance of rowing in promoting the healthy growth and all-round development of adolescents.

Zhao Zhonghao, captain of the Liaoning Communication University rowing team, spoke about the bitterness and sweetness in training with his peers, which is a rare experience in his college life.

Rowing, known as the "flower of industrial civilization", is very consistent in relation to Shenyang's cultural accumulation.

According to Sui Qingyang, director of the youth committee of the China Rowing Association and general manager of the Shenyang International Rowing Center, the first Shenyang International Open Regatta was held in 2018, making rowing popular in Shenyang, and the The second edition of 2019 attracted rowing teams from France, Japan, New Zealand and Thailand, among others, making the event international.

In 2020, the first invitational youth rowing competition was launched during the third edition, laying the foundation for the development of youth rowing in Shenyang.

In 2021, through the "wisdom plus" curriculum system, more than 40,000 primary and secondary school students from Hunnan District of Shenyang engaged in the sport of rowing.

In 2022, the China (Shenyang) Rowing Development Index was launched in Shenyang, exporting Shenyang's experience in rowing development to the world.