Having twins made creating extra space at home twice the challenge for Marcus and Katy Mollmann.With each of them juggling a baby, he said, “We just didn't have the time or ability to lift a heavy piece of furniture off our floor.”The hassle...

Having twins made creating extra space at home twice the challenge for Marcus and Katy Mollmann.

With each of them juggling a baby, he said, “We just didn't have the time or ability to lift a heavy piece of furniture off our floor.”

The hassle of lugging their stuff around, packing it up and hauling it away to be stored sparked an entrepreneurial idea: Uber-izing self storage.

The pair came up with Closetbox, a valet service for moving and storing everything from rooms full of household items to sports gear - and retrieving them when needed. And then storing them again.

Self storage generally has been booming, especially in Orange County, where residents can only afford so much house and extra space tends to be sparse.

The median price of a home sold here hit $665,000 in December. And when was the last time you saw one with an attic or basement?

Traditional self-storage businesses also tend to see steady demand because they’re not necessarily tied to the economy. Death, divorce and downsizing, as well as job moves, all factor in.

That means the industry “isn’t recession-proof, but it is recession-resistant,” Ryan Burke, an analyst at Green Street Advisors, a Newport Beach-based real estate research firm, told the Wall Street Journal in 2015.

Closetbox isn’t the only valet storage company out there. Others around the country include the aptly named Box Butler, UrBin, MakeSpace and Clutter.

“Storage is an incredibly attractive market with incredible stickiness with consumers,” said Ann Miura-Ko, co-founder of technology investment firm Floodgate Fund LP, in a story on the website Inside Self Storage. Valet storage companies have the capacity to drive change, she said, “much the same way companies like Lyft and Uber have fundamentally transformed the transportation market.”

Mollman, Closetbox’s founder and CEO, said in a recent interview the company has raised $7 million so far and is in 65 cities across the nation.

The Denver-based company contracts with professional movers, including 44 trucks in Orange County, and uses two storage facilities here so far – in Anaheim and Buena Park, as well as one across the line in Santa Fe Springs.

It’s irrelevant if customers live in, say, San Clemente, and their stuff is on mothballs in the opposite side of the county. They don’t have to sweat it, Mollman says, because they don’t have to get it.

Each customer has a personalized, online dashboard containing their inventory. The company says it offers free pickup and return delivery for the cost of a traditional self-storage unit.

They’re not looking for mansion dwellers. The service taps out at the contents of a three-bedroom home.

“You don't have to figure out how you're going to call all your friends and buy them pizza, rent a truck, go buy moving blankets and straps … then go find a self storage unit, rent it and fill out all the paperwork,” Mollman said. Arranging for pick ups and storage, he added, “takes less time than buying an airline ticket.”

A valet storage service also can come in handy when a real estate agent is in a hurry to help a homeseller declutter or get a house ready for staging.

As to the Uber comparison, the customer knows in advance what the service will cost, because it’s not based on how many hours it could take a mover to pack up the items, travel to a storage facility and unload.

Instead, it’s based on how much storage space is required.

“It’s kind of like riding in a taxi and watching that meter go., vs uber, you just want a lift from point A to point B,” Mollman said.

The company has helped Vanessa Rose Rivera do more than rotate her winter and summer wardrobes. The 30-year-old Santa Ana woman has to juggle nearly everything she owns.

“I travel for work so I stay in several different places at one time,” said Rivera, an event coordinator who rents out her house and hits the road “at least” several times a month arranging trade shows, conventions and other productions.

“I don't have a permanent set apartment or house that I stay in,” she said.

On Yelp, reviews include a customer who called his experience “stupid easy.”

“I HATE moving. I HATE being paranoid about hourly charges. I HATE packing. I just hate all of it,” said Kevin O. of Pacific Palisades. “Finally moving and storage has moved into the 21st century.”

As for the Mollmans, their twins are 3 and a half years old now. Their two other children are 7 and 9. The family has moved into a bigger house.

“But,” Marcus Mollman said with a laugh, “we still store with Closetbox.” 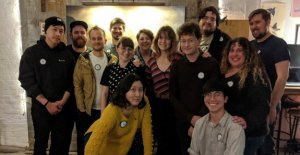 Oregon Ducks get 2nd spring win as Wyndham Clark and...