At this point, it would not surprise many people, if any at all, if someone in their life told a story about their grandmother discussing NFTs. At this point, it would not surprise many people, if any at all, if someone in their life told a story about their grandmother discussing NFTs. She may have referred to them as something else entirely but the concept was at least present in conversation. Instances like this go to show the digital asset has wiggled its way into seemingly every corner of life. Even those who generally struggle with technological literacy have at least heard of the growing trend. Non Fungible Films, a premier digital entertainment studio with a focus on NFTs, is a strong part of this. All the unique avenues they have engaged in are evidence of why this is the case.

Take what they are doing with intellectual property, NFTs, and their Creator Lab as an example. In general, the internet has become a place governed, monitored, influenced, and even owned, by people who in no way represent the everyday person. This has created a corporate and cookie cutter experience for the user. Ownership is the key word when talking about this conceptually. Anyone involved with Non Fungible Films, which is obtained through their Membership Pass NFT, will gain access to a world owned by the users, no matter what happens. This is because of the blockchain and NFTs the world is built on. No person or entity can take away what is already owned by another party. In the long run, the idea is to give true owners the ability to create the world they desire, not the one created by outside forces.

Characteristics like this are one help carry the momentum supporting the unstoppable force that seems to be NFTs. If these digital assets are only going to continue their upward trend, discovering the best places to sell them could prove beneficial.

If there is one marketplace which has become the NFT version of Amazon, this is it. If you can dream up an NFT, chances are, there is at least something even slightly resembling it listed for sale on the site. This has its pros and cons. On one hand, the immensity of the marketplace lends itself to an array of unique visitors and potential purchasers. On the other hand, any listing you make could fall victim to the overwhelming number of available NFTs and be lost to anyone curious. However, this is only the tip of the iceberg when it comes to what OpenSea has to offer.

If you are searching for the ability to do more with the blockchain than simply own an NFT, OpenSea might be just the place you are looking for. Their site provides users the option of creating items solely for use on the blockchain or within the metaverse. All of this is done in a manner which removes any confusing code or other hurdles from the equation. Furthermore, OpenSea has demonstrated time and again that their platform can link with any crypto based game or other endeavor making it a hub for all things blockchain.

If OpenSea is the NFT equivalent to Amazon, then Rarible is OpenSeas' twin brother. There are more listings here than one can shake a stick at and each one is just as intriguing as the last. If you only wanted to window shop NFTs, Rarible would be one of the two marketplaces to do it on. While the two marketplaces are extremely similar on the surface and even behind the curtains, there are some stark differences.

The largest of these is how Rarible handles any and all transactions which take place on their site. In order to buy an NFT, a user must pay for it using a token which has a dedicated use to this specific marketplace. The inverse is true if a user were to sell an NFT here - they would receive the Rarible token as payment. This difference should not give anyone pause as Rarible is part of the Ethereum network so there is nothing resembling a pump and dump here.

Speaking of differences, Foundation has found a way to set itself apart from the competitors with the way they track and reward NFT creators who choose to sell their assets here. Foundation adheres to the belief that art, as well as many NFT ventures, is a gift that keeps on giving as the viewer or consumer can always revisit the work. This belief has spawned their marketplace model.

Regardless of any characteristics, conditions, or other aspects demonstrated by an NFT,  whenever an NFT is sold on Foundation, the original creator receives a cut of the sale total. This is the blockchain embodiment of art which keeps on giving. Though in this case, the creator is not removed from any financial benefit from their personal work.

This marketplace’s approach to selling NFTs should be far more digestible than anything previously mentioned as it has already been covered in this writing. Like Rarible, BakerySwap operates on a token system of their own which is responsible for transferring value when an NFT transaction occurs. Without this token, any cryptocurrency a user holds will be rendered useless in the NFT buying process. This means anyone attempting to turn a profit on their NFT should have a crypto wallet in place to ensure that everything about their sale goes off without a hitch.

Also like Rarible, BakeySwap is the home to an enormous selection of NFTs available for purchase. Seeing as supply does not appear without some level of demand already existing, it stands to reason there is a large number of people regularly visiting BakerySwap in search of their next NFT. This could mean a quick and easy sale. Provided you are trying to sell an NFT, BakerySwap, alongside all its perks, may be the marketplace for doing so.

There is no two ways about it, selling an NFT is not as straightforward as launching a lemonade stand as a kid. Hopefully, the information provided will hold you over until you can make certain you have a deep understanding of going about this. Without that understanding, your next NFT sale could be more headache inducing than rewarding.

1 Thousands of Quebecers without electricity 2 La Ronde reopens its doors 3 Demonstration in support of Bill 101 in Montreal 4 Brooklyn Half Marathon: Runner dies after crossing... 5 A first case of monkey pox in Switzerland and Greece 6 Lightning-Panthers: a streak as grueling as it is... 7 Major League Baseball's top prospect recalled... 8 NHL: two more years for Taro Hirose 9 Vernon Adams Jr.: A Proud Ambassador 10 World Championship: A first defeat for Sweden 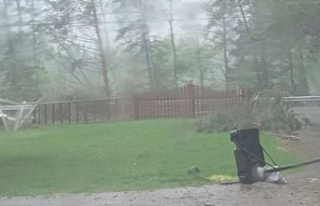 Thousands of Quebecers without electricity