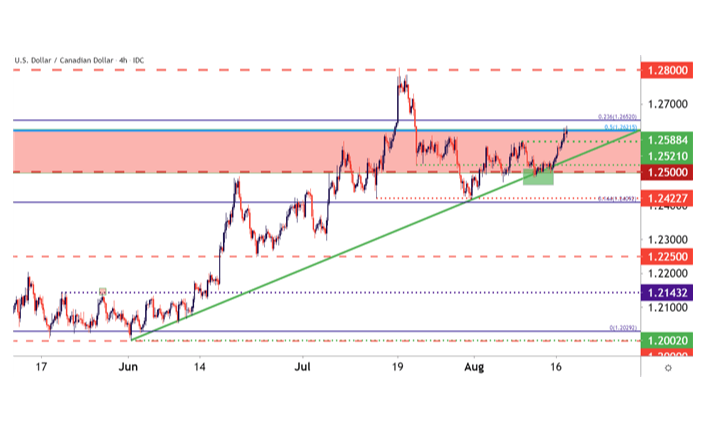 After last week's test in a key area of the chart, the USD/CAD recovery continues. Since March, USD/CAD has seen price action pull at the 1.2500 psychological level. This price is the bottom of a longer-term zone that spans the 1.2622 Fibonacci levels. And as looked at last week, that price was also confluent with a trendline that can be found by connecting swing lows from early-June and late-July trade.

After a rather pensive test of support last week, with the US Dollar falling on the heels of consumer sentiment data released on Friday, bulls sparked a topside push shortly after the open this week. The 1.2622 Fibonacci level has helped to maintain the highs, while prices have risen to the topside support zone.

While this keeps the possibility of breakout potential open, it is possible to fail to break that level now and what's ahead. Prudence could be the best option. Tomorrow will bring Canadian inflation data, and later in this session we'll receive minutes of the FOMC meeting from the July rate decision. The meeting resulted in USD weakness, Powell easing market fears about a taper discussion. But the real question is now whether the details of the meeting will soften USD after a strong start to the week.

Support potential is found around the prior resistance at 1.2588. This can be seen on a short-term basis. Below that is the bullish projection trendline, which currently stands at around 1.2550. Below that, there is another point of support at 1.2521 which was resistance last week.

To illustrate the relevance and significance of the current zone, we can take a look at the chart. This shows how the recent bullish move in the pair is only a part of the larger picture. The 23.6% Fibonacci Retracement of 2020-2021's sell-off is just above the 1.2622 price. A breach above this price could expose a potential run-up to the psychological level of 1.3000. The 38.2% retracement from that major move is just above the round level. This creates a "zone" for potential long-term resistance. 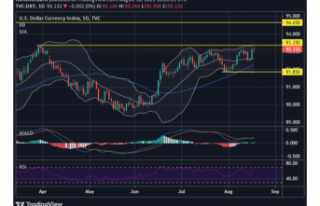