Mexican Peso Forecast: USD/MXN The Balance of Risks Appears Tilted to the Downside 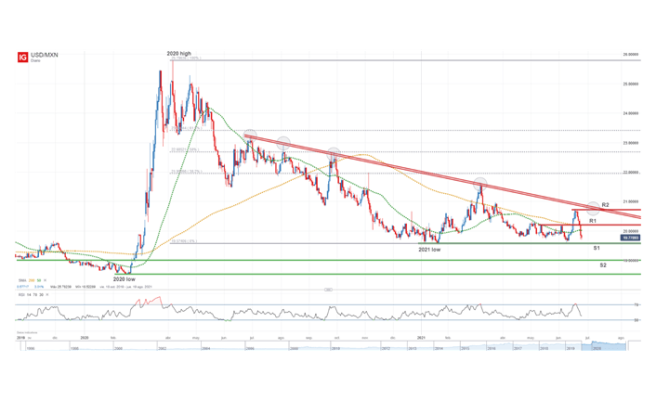 Mexico's next week's economic calendar does not include many risk events. Although the June manufacturing PMI will be published on July 1, it will likely get some scrutiny. However, the future course of Banxico’s monetary policy in light of its surprise rate hike surprise and NFP release in the U.S., will dominate market discussion and determine USD/MXN price action.

The Mexican monetary authority charted an unexpected course. It raised its benchmark interest rate by 25 basis points to 4.255% for the first time since 2018. This move triggered a huge rally in the Mexican peso against the greenback.

Banxico's hawkish language and its decision to increase borrowing costs to counter inflation fears, as well as the fact that it has decided to raise borrowing costs due to concerns that the rising trend in consumer prices might persist for longer than anticipated, have led some investors to discount a full-fledged tightening cycle. This means there could be four rate increases this year.

In the short-term, the prospect of Mexico's aggressive monetary policy, at least in relation to the Federal Reserve's stance on the matter, could support the Mexican peso, particularly if volatility remains low and risk appetite remains high. In this period of historically low rates, yield trade is normal. This is evidently in the favor of the Mexican peso because it has a carry advantage.

The USD/MXN balance of risk is tilted to the downside for the reasons mentioned above. This means that the price could soon reach its 2021 lows of 19.55, as selling pressure increases, mainly due to Banxico’s hawkish pivot.

The USD/MXN fell below its simple moving averages of 50-day and 200-day, which is a sign that sellers may be temporarily in control. With the recent pullback, however, it seems that price is heading towards its 2021 low of 19.55, which is a critical technical support area. This area should be closely monitored as bears could unleash a bigger sell-off, triggering a move towards the psychological 19.00 mark. If selling pressure is lower and USD/MXN reverses higher then the first resistance is at 20.25 followed by 20.75. (In this area, the June high intersects with a 12-month trendline resistance). 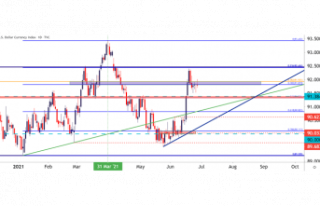