While the IATA request for the lifting of quarantines, several countries have put in place new restrictions to and from France in the face of the resurgence of While the IATA request for the lifting of quarantines, several countries have put in place new restrictions to and from France in the face of the resurgence of the Covid-19. United Kingdom, Spain, Morocco... is the point on the measures related to the Covid-19 in Europe and in the world.

Summary in The Uk Spain Italy Portugal Belgium Greece The United States, Morocco, and The Maghreb

[updated on September 28, 2020 at 10: 15 am] Prohibition of travel to be non-essential, masks are mandatory interior and exterior, distancing, PCR testing, temperature taking... Attention before you book your plane tickets for a city break or a week's holiday in the coming weeks, some countries in Europe have imposed new hygiene measures and conditions of entry on the territory in order to counter the spread of the Covid-19. Seven countries of the european Union (Spain, Romania, Bulgaria, Croatia, Hungary, Czech Republic and Malta) show an evolution of the epidemic of Covid-19 disturbing and increased risks of mortality, alarmed the european Centre prevention and control (ECDC).

The prime minister Boris Johnson announced on Tuesday a battery of new restrictions on England : closing at 22h pubs, bars and restaurants, telework encouraged, marriages limited to 15 participants, deferral of the return of the public to sporting events. The mask-wearing compulsory is extended to employees of shops, bars and restaurants, and the penalties more severe.

Italy has revised its policy on entry into the territory for French travellers. While all travellers arriving in france must fill out a form before entering the Italian territory, some of them will also have to report upon arrival to the regional health authority, and to submit the negative result of a molecular test (PCR) or antigen of less than 72 hours, or submit to a test on the spot upon arriving in Italy. These measures, which come into force on 22 September 2020 relate to the travellers who, during the last 14 days, have stayed or passed through the regions of france the following : Auvergne-Rhône-Alpes, Corsica, Hauts-de-France, Ile-de-France, New-Aquitaine, Occitania and Provence-Alpes-Côte d'azur.

In Belgium, the ministry of foreign affairs has decided to place Paris and 15 other French departments in the prohibited area, because of Covid not mastered. Travel "non-essential" to the destination of these departments are strictly prohibited. Holidaymakers who return will have to be tested on-the-field and undergo an immediate quarantine. For its part, Denmark has again closed its borders to French since the 29th of August. France will be again considered as a country "safe" when its rate of incidence over the last 14 days will go back to below the threshold of 20 cases per 100,000 population

Germany, which holds the rotating presidency of the european Union, said in late August that it wanted to harmonize the travel restrictions within the EU. The duration of the quarantine required (10 to 14 days), the validity of the screening tests (48 to 96 hours prior to arrival) as well as the definition of an "area at risk" differ greatly from one country to another, and can thus sow confusion among the travelers.

Poland has suspended air links with France since the 16th of September 2020 due to the pandemic of the Covid-19, has announced that the Polish government. Flights are prohibited until 29 September, only flights booked on or before September 16 are allowed.

in the Face of these many restrictive measures, more than 20 european associations in the sector of travel and tourism* (representing over 5000 members) have sent an open letter to Ursula von der Leyen President of the european Commission to put in place a process of coordination of the restrictions that relate to travel within the European Union.

Portugal Vacation : masks, sanitary rules... The formalities for travel to the all saints ' day

Holiday in Spain : restrictions in Madrid, mask mandatory, beaches... The measures to meet

The United Kingdom tightens its restrictions

The prime minister Boris Johnson has announced a battery of new restrictions on England : closing at 22h pubs, bars and restaurants, telework encouraged, marriages limited to 15 participants, deferral of the return of the public to sporting events. The mask-wearing compulsory is extended to employees of shops, bars and restaurants, and the penalties more severe. These measures will be in place for "maybe six months", said Boris Johnson. The prime minister called for "team spirit" and "discipline" of the British to comply with the new measures under the penalty of "having to go more far" in the restrictions.

The United Kingdom has put in place a quarantine for travelers from France, the netherlands and Malta since the 15th of August. A measure that had already been imposed, but which had been lifted last month. It will need to be completed prior to the Public Health Passenger Locator F

1 Test Covid-19 : where to get tested for the coronavirus... 2 FIGURES COVID. The balance sheet of the coronavirus,... 3 Flèche Wallonne : Hirschi winner, Cosnefroy 2nd in... 4 Travel agencies and coronavirus : at the end of the... 5 Michel Drucker : how will he be after his heart operation... 6 Holidays in Spain : restrictions in Madrid, mask mandatory,... 7 My Premium Rénov' : how much for that in 2021 ? 8 Ballon d'or 2020 : the trophy cancelled, France Football... 9 Netflix : what movies and shows to see in October... 10 Symptoms of Covid : how to detect the appearance of... 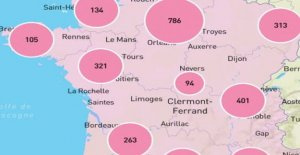 Test Covid-19 : where to get tested for the coronavirus...