After three weeks of activity, the crater of Cumbre Vieja volcano experienced an episode of "volcanic lightning". We take stock of the situation on the island After three weeks of activity, the crater of Cumbre Vieja volcano experienced an episode of "volcanic lightning". We take stock of the situation on the island of La Palma in the Canary Islands.

[Updated on October 13, 2021 at 10:57] It has now been three weeks since the molten lava flows continuously from the Cumbre Vieja on the island of Palma in the Canary Islands. On Monday, October 11, lightning overcame the summit for a few seconds, a rare phenomenon known as "volcanic lightning".

Everywhere on the island of La Palma, the images of the damage of the Cumbre Vieja volcano eruption are impressive. One of the most active volcanoes in the Canary Islands continues to spew lava and ash on the island of La Palma. The collapse of this main mouth of the Cumbre Vieja volcano ("old summit" in French) caused a resurgence of eruptive activity, with the emission of fluid lava. Lava flows have so far devastated 600 hectares and more than 1200 buildings. While 6,000 people have already had to be evacuated since 19 September, the authorities have been forced to confine no less than 3,000 residents in their homes because of the emission of potentially toxic gases.

Lava from the volcano has already covered 399 hectares of the island, destroying in its path nearly a thousand homes since the eruption began on September 19. "There must be a lot of lava in reserve", and this lava flow "should last between one and three months" said on franceinfo Jacques-Marie Bardintzeff, volcanologist and professor at the University Paris-Saclay. This eruption has already caused the displacement of more than 6,000 people, including 400 tourists "who have been removed from risk areas" and settled in Tenerife. However, no deaths or injuries are to be reported.

Is it possible to follow the eruption of Cumbre Vieja live via live video?

Several sites offer to follow the eruption of Cumbre Vieja on video. Most often, these live broadcasts are based on webcams located nearby, the broadcasts are then done via Youtube most often. Note the live of the Spanish television RTVE which allows to watch the lava flows live.

When did the Cumbre Vieja volcano in the Canary Islands erupt?

The island of La Palma is part of the Canary Archipelago where volcanoes are numerous. The Cumbre Vieja volcano had not erupted for 50 years. It is one of the most active volcanoes in the Canary Islands and has been under close surveillance for several years. As early as 2017, intense activity had been detected. On September 11, 2021, this activity doubled, followed by numerous seismic tremors and it was on September 19, 2021 that the first lava outpourings were observed, followed by a seism with a magnitude of 4.1 that opened a second eruptive mouth. The population evacuations had already begun but the destruction was numerous and rapid: road cuts, houses ravaged and destroyed by lava flows, significant ash...

What are the consequences of lava flowing into the sea?

After doing much damage in its path, lava from the volcano had reached the sea on September 28. According to Fernando Tuya, biodiversity and conservation researcher at the University of Las Palmas in Gran Canaria, the first effects of the lava entering the sea are "devastating" with "the direct death of organisms that are going to be buried" under the flow. In the long term, however, this could be "good news" for marine life, which could be "enriched" by it. Pouring into the Ocean, the lava solidifies and forms a huge terrain, which is already 30 hectares in size. 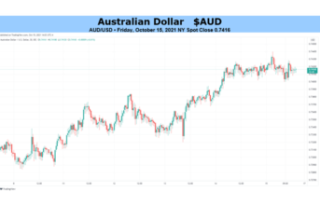 Australian Dollar Outlook: AUD/USD Back On the Offensive...