The kingdom will work to reduce its emissions but will continue to export and pump fossil fuels to Asia. Saudi Arabia, one of the largest oil producers in the world, announced Saturday that it plans to achieve "net zero" greenhouse gases emissions by 2060. This joins more than 100 countries participating in a global effort against man-made climate change.

The announcement was made by Crown Prince Mohammed Bin Salman in a few scripted remarks during the opening of the Kingdom's first-ever Saudi Green Initiative Forum.

It was timed to make a big splash a little over a week before the global COP26 climate summit, which is being held in Glasgow.

Prince Mohammed stated that the kingdom would reduce its carbon emissions. However, the kingdom will do this through a "Carbon Circular Economy" approach. This approach is based on unreliable carbon capture technology and storage, rather than efforts to reduce global dependence on fossil fuels. This announcement does not affect Saudi Arabia's continued aggressive investments in oil or exports of fossil fuels to Asia.

The Saudi Green Initiative forum stated that the transition to net zero carbon emissions would be done in a way that maintains the kingdom's leadership role in enhancing security and stability in global energy markets. This was especially considering the maturity of technology necessary to manage and decrease emissions.

Despite efforts to diversify its revenue streams, the kingdom's oil- and gas exports are the backbone of their economy.

Starting Oct. 31, the global summit COP26 will bring together heads of state from all over the globe to tackle global warming and its problems. This summit is being called "the last chance" to stop global warming reaching dangerous levels. It is expected that the summit will see a flood of new commitments by governments and businesses to cut their greenhouse gas emissions.

According to leaked documents, the kingdom has repeatedly asked for the report's authors to remove references to the need to eliminate fossil fuels. The panel's conclusion that there is an urgent need for accelerated mitigation actions at every scale was also deleted by the kingdom.

The United Arab Emirates, another major producer of energy in the Gulf Arab region, announced earlier this month that it would also join the "net zero club" of nations and set a goal to achieve net-zero emissions by 2050.

Although the UAE didn't give any details on how it would reach the target, its Ministry of Climate Change and Environment said that they would collaborate with the government's energy, economy, industry and transport sectors to achieve net zero by 2050.

According to the UAE, it has three of the most powerful solar installations in the world. It is also the first Middle East country to use nuclear power.

1 Emirati prosecutor investigates Dubai's Union... 2 New Heaven Hill contract ratified by striking bourbon... 3 What Drug Companies Are at the Heart of the Zantac... 4 Things You Must Know About Cryptocurrency in 2021 5 What Are the Problems with Cryptocurrencies? 6 Bitcoin Payment FAQs Answered 7 Simple Ways to Take Control of Your Personal Finances 8 3 Things You Need to Know About Stocks 9 Good deal iPhone 12: price drop at Rakuten 10 iPhone 13: where is it cheapest? 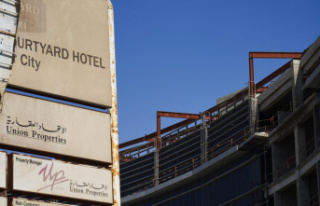