The 53-year-old engineer, currently heads the product line Rolls-Royce and BMW-class group starting in July, Board member for development of the. Weber have "a The 53-year-old engineer, currently heads the product line Rolls-Royce and BMW-class group starting in July, Board member for development of the. Weber have "a decisive share of the success of our highly successful major series, BMW 7er, 8er, X5, and X7," said Chairman of the Supervisory Board, Norbert Reithofer. At the same time, he paid tribute to Cheerful, "the highest recognition for his many years of successful work not only in the Board of management of BMW AG ". He had set in the field of electric mobility, and the digital networking of important impulses.

Merry is in June, 60 years old, and reached the unwritten age limit for the BMW Board members. He is since December 2014, member of the management Board and chief last August was the appointment of Oliver Zipse to the group also as a candidate for the succession of its predecessor, Harald Krüger.

After the change from the production Department to the top management of the group Zipse had occupied in the Executive Board the Item for production and personnel. Ilka Horst Meier has been appointed the new chief of staff, Milan Nedeljkovic to the new production Board. Both are Zipse and Weber's own plants. In the case of BMW, a replacement has Vacancies with people from the own home Tradition.

1 Bus and train to Corona times: are the public Transport... 2 After England's reduction in interest rates against... 3 Harmful nitrate in the water: Left-hand farmers against... 4 The ECJ has decided: If your flight is twice too late,... 5 278 gas stations for sale - OMV withdraws from Germany... 6 Altmaiers contacts to the wind power opponents: tea... 7 Product must not be used! Aldi-Süd returns to the... 8 RWE earned more with energy trading - share still... 9 Virus-the fear is now palpable: the railway is reporting... 10 Virus brings Fraport in distress: the airport Association... 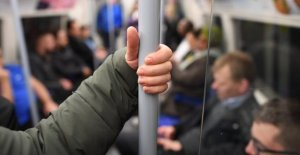 Bus and train to Corona times: are the public Transport...