The State is injecting € 43 million for cycling

the first in A series of 111 territories will receive funding from the State to build and extend bike paths, in the framework of a call for project designed to 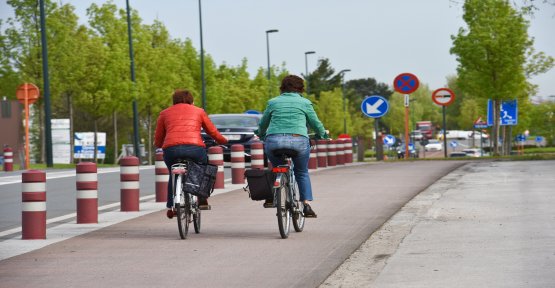 the first in A series of 111 territories will receive funding from the State to build and extend bike paths, in the framework of a call for project designed to encourage bike traffic, has announced this Saturday, September 14 the department of the ecological Transition. Around 152 projects have been selected for this first call, launched in late 2018, with the key 43.7 million euros in subsidies.

This announcement is in the framework of the "cycling plan", detailed by the government a year ago, which includes the creation of a fund of € 350 million over seven years designed to develop the bicycle network: each year, 50 million will be made available to co-finance with the communities with the infrastructure to ensure the continuity of the tracks.

"With 275 cases filed by 170 communities or societies, the result of this call for projects confirms the strong commitment of the jurisdictions in the implementation of infrastructure for cycling," noted the ministry. For the common it comes to solving the discontinuities of routes (crossings, stations, highways, etc), that inhibit the safety and use of this mode of transport.

Among the projects selected, in territories as diverse as Dole, Valves, Aurillac, Douai, Longwy or Bastia included the creation of bridges, rehabilitation of bridges, or tunnels, or even the securing of the crossings crossroads complex.

The government has as a goal to triple by 2024 the modal share of cycling in daily travel, to go from 3% to 9%.

" SEE ALSO : This new electric bike does not need to be reloaded

1 Trade : China will exempt out of surtaxes, the pork... 2 Nearly a third of pensioners do not claim their full... 3 In 2019, the communities improve their finances 4 In 40 years, Mcdonald's is the largest restorer of... 5 Despite a buying power increase, the confidence of... 6 Maxime Nicolle alias Flyrider, will there soon be... 7 The Fed lowers its interest rate by 0.25% 8 The report very policy of the act of the programming... 9 Bercy will remove 18 small taxes unnecessary 10 Hercules, this project, which aroused the dissatisfaction...

Trade : China will exempt out of surtaxes, the pork...