Downing Street candidates called to position themselves on the environment

The candidates to succeed British Prime Minister Boris Johnson were called on Sunday to position themselves on the climate crisis, a subject relegated to the background in the campaign, while they find themselves face to face in the evening for a second televised debate.

The candidates to succeed British Prime Minister Boris Johnson were called on Sunday to position themselves on the climate crisis, a subject relegated to the background in the campaign, while they find themselves face to face in the evening for a second televised debate.

• Read also: A quote from a Harry Potter film slips into a British debate

• Read also: Race at Downing Street: Sunak in the lead, ahead of Mordaunt

They are still five in the race for power launched after the announcement on July 7 of the resignation of Boris Johnson, swept away by an avalanche of departures triggered by an overflow of scandals and lies.

As temperatures topping 40 degrees are expected in England earlier this week, COP26 President and Minister Alok Sharma has called on Tory candidates to meet the country's climate pledges, a subject relegated to the back burner. hitherto dominated by the cost of living crisis and integrity issues.

“Anyone who aspires to lead our country must show that he will take the problem very seriously,” Mr. Sharma told The Observer newspaper on Sunday, not excluding leaving his post if this was not the case.

If all except Kemi Badenoch affirm that they will maintain the country's objective of achieving carbon neutrality by 2050, only Rishi Sunak does not intend to question the levers decided under Johnson to achieve this goal.

“We have to put that (the carbon neutrality objective) aside until we make sure that no one suffers” from the cost of living crisis, MP Iain Duncan, supporter of Liz Truss, said on Sky News on Sunday. .

Asked about the BBC, Penny Mordaunt said that she would maintain the objective, but that it should not “knock out” the British financially.

"There are still politicians who think that protecting the planet is not something profitable" as fires and heat records multiply in Europe, tweeted, weary, the British Minister for the Environment. international, Zac Goldsmith.

The candidates will have the opportunity to discuss their environmental strategy on Monday during a question and answer session on the subject organized by a group of Conservative MPs.

Until then, the cost of living crisis which is strangling the British has dominated the debates, Liz Truss or Penny Mordaunt promising tax cuts to relieve households.

Announcements that resemble unrealistic "fairy tales", retorted Mr. Sunak on Friday, for whom such measures would only increase inflation already at a record 9.1% in May.

After months of scandals and lies under Boris Johnson, issues of integrity and trust are also widely discussed. Only Tom Tugendhat gave a firm "no" answer when asked on Friday whether the resigning prime minister was honest. Kemi Badenoch contented herself with a “sometimes” laughing and the other three sputtered vague answers.

The five candidates will face each other again on television on Sunday evening. Betmakers still put ex-Defense Minister Penny Mordaunt in the lead neck and neck with Rishi Sunak, ahead of Liz Truss.

But on Saturday, a survey carried out by the Conservative Home site among its conservative readership positioned Kemi Badenoch in the lead, who delivered Friday during a first televised debate a performance less jargon than most of his rivals.

In order to select the new Prime Minister, Tory MPs will vote again on Monday, Tuesday and Wednesday to eliminate the candidates one by one while a third debate takes place on Sky News on Wednesday.

Once the distribution of the final head-to-head has been determined, the choice will fall to the members of the Conservative party who will vote by mail during the summer. The result of the vote is expected on September 5.

1 Somalia: five dead in a car bomb attack in the center 2 Collision between a watercraft and a pleasure boat... 3 Beginning of the novena, awaiting the arrival of the... 4 Blue Jays: a victory before the break 5 Justin Trudeau called Volodymyr Zelensky 6 Woman waking up from two-year coma identifies her... 7 The Capitals of Quebec save themselves with the victory 8 Petry and Poehling happy to turn the page 9 “I have never cycled in such intense heat” - Hugo... 10 Zelensky fires his attorney general and security chief 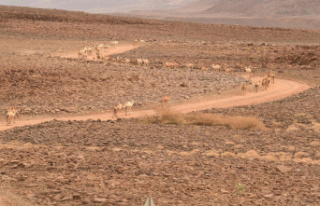 Somalia: five dead in a car bomb attack in the center