The Funcas Panel cuts eight tenths its growth forecast for 2023 to 1.1%

The consensus raises the average annual inflation rate in 2022 to 8. 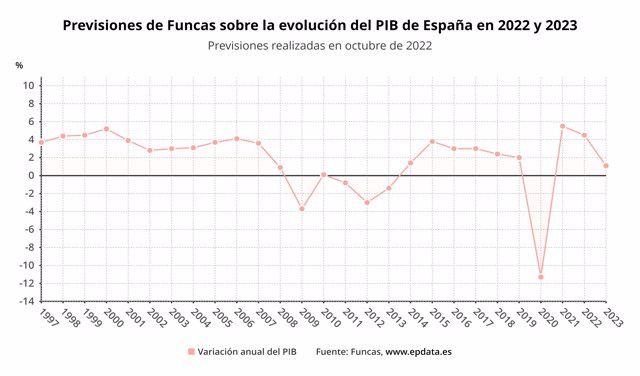 The Funcas Panel forecasts that the Spanish economy will grow by 4.5% this year, three tenths more than estimated in September, but has cut its forecast for the Gross Domestic Product (GDP) for 2023 from 1.9% to 1.1%

The upward revision of the forecasts for this year is motivated by the incorporation of the latest data published on National Accounts referring to the second quarter, a period in which the economy grew by 1.5%, and to the third quarter, when the GDP rose more than expected, 0.2%. But facing the fourth quarter of the year, the majority of panelists foresee negative growth.

In 2023, experts estimate zero growth in the first quarter and forecast increases of around 0.5%-0.7% in the rest of the period of the year.

According to the report published this Wednesday, this year the contribution of the foreign sector will be 2.9 points (1.4 points more than the previous Panel) and that of the national demand of 1.6 points, 1.1 less in relation to the September consensus.

As they explain, all the components of national demand have undergone an intense downward revision and this deceleration will continue during 2023. Next year, the foreign sector will have a negative contribution of -0.2 points, while national demand will contribute 1.3 points, seven tenths less compared to what was estimated in September.

Regarding the estimate for average annual inflation in 2022, the panelists have revised their forecasts upwards by one tenth, to 8.7%, while the core remains at 5%.

Regarding the labor market, the panelists expect employment growth of 3.5% in 2022, two tenths more than in September, a percentage that is reduced by six tenths to 0.9% for 2023.

On its side, the average annual unemployment rate will drop this year to 13% -three tenths less than the previous Panel- and will remain at that level in 2023.

As for the public deficit, analysts have warned that it will remain at high levels. Specifically, the negative balance of public accounts would be 4.8% of GDP this year and 4.5% next year.

On their side, they have pointed out that, in an international context of sharp economic deterioration and inflationary pressures, the decisions of the central banks continue to mark monetary policy, whose direction the markets are already incorporating.

Thus, the panelists have sharply revised their interest rate forecasts upwards. The ECB deposit facility would stand at 2.5% at the end of the forecast period, the Euribor would exceed 3%, while the yield on the 10-year bond would be close to 3.5%. 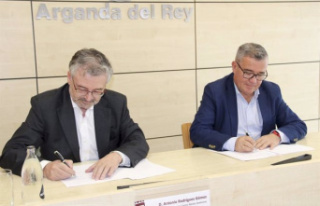