RELEASE: Vuse drives change with a car born in 2022 from the liberating power of creativity (1)

VUSE AND THE McLAREN F1 TEAM CELEBRATE THE SECOND YEAR OF SUPPORTING EMERGING ARTISTS WITH A CAR DECORATION THAT GOES BEYOND SPEED. 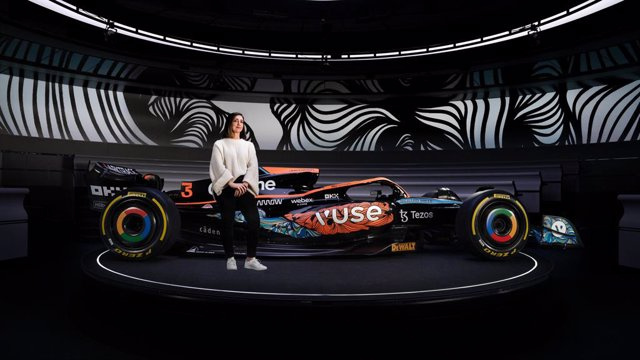 Anna Tangles is the latest artist to take part in the Driven by Change initiative by Vuse, the world's No. 1 vaping brand*, and the McLaren F1 team, bringing unprecedented opportunities in the world of elite motorsports to creatives. less represented. Through her linear artwork and designs, Anna strives to empower artists from all walks of life to see no limits to her own creativity.

Drawing on the legacy of 2021 Driven by Change livery artist Rabab Tantawy, the 2022 McLaren livery design has been inspired by Anna's own personal journey, swapping her day-job at the office to follow her dreams and dedicate his life to creating art. The ever-changing formation of lines in the original livery artwork represents the feeling of liberation, calm and focus that creativity brings as it is guided by the pen on the page. In the iconic blue and papaya colorway of the McLaren F1 team, Anna matches the lines of her artwork with the circuit track, with a sense of calm and focus not unlike the area the drivers enter before and during. each race.

Anna Tangles commented: "As a lifelong F1 fan, I never thought that one day my artwork would be on display at a Grand Prix, and it's all thanks to Driven by Change. I spend my free time training and encouraging other artists. , particularly other creative women from the Middle East, to bring their passion and skills to life, so it is a privilege to be part of a community that supports the same ambition to empower underrepresented artists in this way."

Reflecting the spirit of the Driven by Change initiative, Anna strives to forge a path of transparency and make art accessible to all through supporting her local creative community. Through her workshops and mentorships, she shares tips, insights and techniques with artists who want to explore their creativity, focus and unleash their potential, and it is there that she forged a bond with Rabab Tantawy who continues to inspire Anna and her work.

John Beasley, Group Head of Branding, BAT, commented: "Driven by Change was designed to create a legacy, and we couldn't be more proud that our 2021 artist, Rabab, has identified Anna to continue that legacy. of creativity and change. Anna embodies the spirit of Driven by Change, and it's great to see an original piece of her artwork get its time to shine on one of the fastest moving canvases in the world. We're so excited to to see what the future holds for Anna and to discover future artists to whom she can pass the brush".

The Driven by Change initiative champions underrepresented artists around the world and offers creatives an unprecedented opportunity to tap into motorsport's global platform to showcase their creative works. The 2022 car artwork is a celebration of the diversity of creativity that Vuse and the McLaren F1 Team have brought to the world of motorsport and their continuing legacy in 2023.

To find out more about Anna's story and the Driven by Change initiative visit Vuse and Anna's social media.

*Based on the value share estimated by Vype/Vuse in measured retail sales for steam (ie, the total value of the steam category in retail sales) in the key steam markets: USA, Canada , France, UK and Germany in May 2022

BAT is a leading multi-category consumer goods company with the purpose of building A Better Tomorrow™ by reducing the health impact of its business by offering a greater variety of enjoyable and less risky products for adult consumers.

The company remains clear that fuel cigarettes pose serious health risks, and that the only way to avoid them is to not start or quit smoking. BAT encourages those who would otherwise continue to smoke to switch entirely to lower-risk, scientifically proven alternatives*†. To achieve this, BAT is transforming itself into a truly consumer-focused, multi-category consumer products business.

BAT's ambition is to have 50 million consumers of its non-fuel products by 2030 and generate £5bn of revenue from New Categories by 2025. BAT has set itself some very ambitious ESG targets, including achieving neutrality of carbon in Scopes 1 and 2 by 2030 and eliminate unnecessary single-use plastic and make all plastic packaging reusable, recyclable or compostable by 2025.

The Company's strategic portfolio consists of its global cigarette brands and a growing range of new category reduced-risk*† tobacco and nicotine products and traditional fireless tobacco products. These include vapor, tobacco heating products, modern oral products including tobacco-free nicotine pods, as well as traditional oral products such as snus and wet snuff. In the first half of 2022, we had 20.4 million consumers of our non-fuel products, which represents an increase of 2.1 million compared to 2021.

*Based on the weight of evidence and assuming a complete change in cigarette consumption. These products are not without risk and are addictive.

† Our products sold in the US, including Vuse, Velo, Grizzly, Kodiak and Camel Snus, are subject to Food and Drug Administration (FDA) regulations and no risk reduction claims will be made for these products without FDA authorization.

McLaren Racing was founded by New Zealand driver Bruce McLaren in 1963. The team participated in its first Formula 1 race in 1966, and since then McLaren has won 20 Formula 1 world championships, more than 180 Formula 1 Grands Prix, the 500 Indianapolis miles three times and the 24 Hours of Le Mans on his first attempt.

McLaren was the first F1 team to receive the Carbon Trust standard in 2010 and has maintained it on a bi-annual basis ever since, most recently in February 2021. The team was also the first in F1 to receive the Sustainability Accreditation Award. of the FIA ​​at a three-star level in 2013 as part of the FIA ​​Environmental Certification framework, before becoming a signatory to the UN Pledge for Sport for Climate Action in 2021.