The price of electricity collapses this Saturday by 51% and falls to its lowest level in the year, with 55.98 euros/MWh 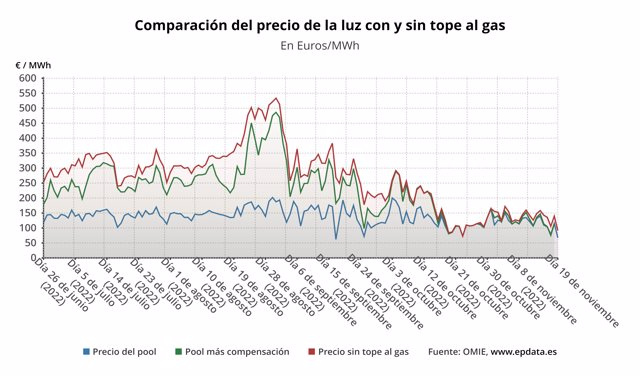 The average price of electricity for regulated rate customers linked to the wholesale market will collapse on Saturday by 51.1% compared to this Friday, to 55.98 euros per megawatt hour (MWh), its lowest level in what which is 2022.

In the auction, the average price of light in the wholesale market --the so-called 'pool'-- will stand this Saturday at 67.38 euros/MWh. The maximum price will be registered between 9:00 p.m. and 10:00 p.m., with 123 euros/MWh, while the minimum for the day will drop to 22 euros/MWh between 1:00 p.m. and 2:00 p.m., according to provisional data from the Iberian Market Operator of Energy (OMIE) collected by Europa Press.

To this 'pool' price is added the compensation to the gas companies that must be paid by consumers who are beneficiaries of the measure, consumers of the regulated tariff (PVPC) or those who, despite being in the free market, have an indexed rate, which for this Saturday, for the fourth consecutive day, will show a negative balance with -11.4 euros/MWh.

This drop in the price of electricity for this Saturday is mainly due to a greater participation of renewables, especially wind power, as well as the drop in demand, due to the weekend and the levels of gas prices in the Spanish market, which was trading this Friday below 53 euros/MWh in Mibgas.

The 55.98 euros/MWh of this Saturday represent the lowest level since the Iberian mechanism came into force, on June 15, and the lowest price for regulated tariff customers linked to the wholesale market since June 20, 2021, when the 'pool' marked 52.63 euros/MWh for that day.

In the absence of the 'Iberian exception' mechanism to cap the price of gas for electricity generation, the price of electricity in Spain would be around 91.42 euros/MWh on average, which is around 35.4 euros/MWh more than with the compensation for customers of the regulated rate, who will thus pay 38.76% less on average.

In the first 17 days of November, the average daily price for regulated rate customers linked to the wholesale market --including the adjustment for the gas cap mechanism (6.02 euros/MWh)-- stood at 126 0.02 euros/MWh, which represents a decrease of 22.73% compared to the price of October and 34% compared to a year ago, according to data from Grupo ASE.

The consultant's analysts considered that the fall in the price of gas in Spain (Mibgas), well below the European price, in recent weeks is behind the abrupt reduction of the 'gas cap', currently below the impact it had on September (102.56 euros/MWh) or in August (153.34 euros/MWh).

In addition, electricity consumption in the first half of November has plummeted by 9% compared to the same period last year. In the last two months, demand has been below the daily average of 600 gigawatt hours (GWh), something that has not happened since the toughest months of confinement during the pandemic, when it dropped to 539 and 560 GWh in April and May. respectively.

Behind this trend are the high temperatures, the moderation of household consumption due to high prices and the reduction in industrial consumption, which in September was 10%. In addition, the drive for self-consumption, which is on track to break another record and exceed 1,500 MW installed, would also explain part of the decline, according to ASE analysts.

In this way, so far in November, the demand for gas to generate electricity has fallen by 23.6% compared to last October. Partly thanks to the drop in consumption, but also to the boost in wind power, which is gaining prominence as storms set in, and the coupling of the Almaraz II nuclear power plant, under maintenance since the end of September.

The lower demand has also reduced electricity generation, which has been 7.6% less than in November of last year. However, the fall could have been even greater if it were not for the export balance to France and Portugal, adds the ASE group. 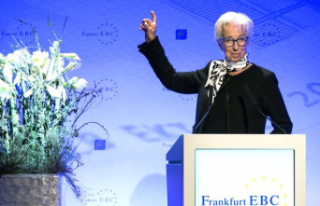