Unökologische pricing policy: The cost of long - distance bus and train tickets have risen. The fly in Germany, by contrast, became cheaper. Much too expensiv 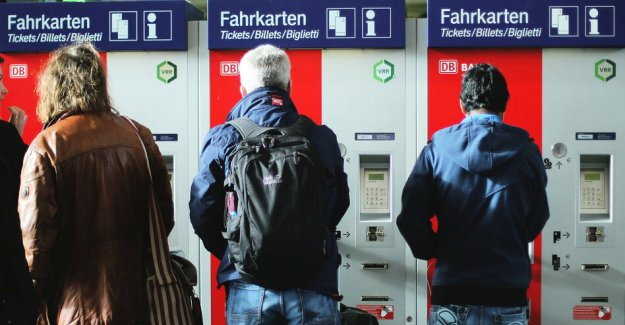 Unökologische pricing policy: The cost of long - distance bus and train tickets have risen. The fly in Germany, by contrast, became cheaper.

Much too expensive, despite the VAT reduction: the tickets of the Deutsche Bahn photo: Reuters

BERLIN taz | to travel by train within Germany, has become in recent years more and more expensive, the prices of domestic flights decreased, however. The Figures, published by the Federal Statistical office on Friday.

After that, the ticket prices have increased in the long-distance transport of the web between November 2015 and November 2019 of 1.3 percent. According to a study of the traffic club of Germany, the costs for the tickets from the point of view of the clients are already much too high. In short-distance transport of the Deutsche Bahn, the DB-Regio-products – rose in price by 14 percent. Domestic flights were cheaper. Travelers paid in the same period, nearly 3 percent less.

you can Also use other means of transport, which are much more climate-friendly than the plane, have become more expensive, and journeys with the bus cost, according to the statistics of the interior last November, 15.4 per cent more than three years ago. "Consumer prices, total, increased in the same period, to 5.6 percent," said the German Federal Statistical office. The prices for driving ally cards in circulation also grew disproportionately: they rose by 8.1 percent.

In the public transport prices will rise in the coming year. In the long-distance transport tickets through the reduction of VAT from 19 to 7 per cent, on the price of Tickets from 2020, however, cheaper. This is part of the climate Pact, the, the Federal government decided in the autumn. In the transport of the reduced VAT rate applies.

"The VAT reduction for the long-distance transport on the Railways is only an intermediate step to more fair Competition between air and rail," said Dirk Flege, managing Director of the Organisation pro-Rail Alliance, in the 24 associations and more than 150 companies from the railway industry together. The objective should be that the polluter pay for the entire generated costs. The current prices are not reflected, approximately, the cost, the impact on the Climate.

The management Board of Deutsche Bahn expects that the reduction in VAT in the long-distance traffic the number of passengers per year 5 million will increase. According to data from the Federal Statistical office, the number of rail passengers has risen in the past three years, is already clear: In the year 2018 133 million people for the long haul, there were almost to the train. The were almost 14 percent more than in 2015.

Also in the case of flights and coach transport to the passenger have increased in numbers in domestic traffic. The number of passengers that are flown within Germany, increased between 2015 and 2018 to the main airports of 23 to 24 million. With the long-distance bus 1 Million more passengers were on the way. Here, the number grew from 16 million to 17 million.

1 Mega-salaries, luxury cars: Complete the Bureau of... 2 Still open: Where are they now, Christmas shopping... 3 When you look at Greta's message closer, discovers... 4 Well, that was yesterday, stand for all: We will destroy... 5 Hartz-IV-cost for foreigners has increased significantly... 6 Euro 280 million, the total value of Deutsche Bank... 7 Rhetoric sharpening: What you will of Trump, and Merkel... 8 Salary calculator 2020: Calculate your income tax... 9 Dispute about Nord Stream 2: a Lot of pressure on... 10 History of the Houseplant: home to the plant Kingdom