What is a line of credit is? Pros and cons explained in simple terms What is a line of credit is?

A line of credit is a Bank Overdraft. It is linked to your checking account, typically your salary account. This means that your Bank gives you more money than your account is. How much money you can borrow is different from Bank to Bank and depending on your income.

A special feature of Overdraft facilities is: There is no regular periodic repayment. This means: you are self-pay responsible for the money back. This will let you know in advance exactly what costs will be incurred by the loan. Because the costs depend on how much money you can borrow and for how long.

The biggest advantage of an overdraft loan is its flexibility: Once set up, you can use it easily, without having to submit a credit application. Only if you use it, you pay for it.

The flexibility, however, brings also disadvantages: Through a line of credit, you can get into Minus, without realizing it. In addition, the flexibility has a high price. More on this below.

Who can use a line of credit?

requirements for a line of credit are:

In the case of newly opened accounts or accounts that do not serve as a salary account, a credit check is usually mandatory. You are also required to your Bank of a Change in your income situation, for example in the case of the termination of the employment relationship, notify. The Person

Alexander Artopé entrepreneurs since 1999 as an Internet-active. In 2007, he founded the loan comparison portal smava, one of the first German Fintechs.

What you may use a line of credit?

The money that you borrow via a line of credit, you can use free. Overdraft facilities are used to meet a need of money in the short term. A MRP use for several months is not recommended. High overdraft interest rates make a MRP usage over several months the very expensive.

What is the cost of a line of credit?

with the line of credit associated flexibility has its price: According to the German Bundesbank as the average effective annual interest rate for overdraft facilities to 2018 in Germany 8,37 percent. For comparison: The effective annual interest rate of installment loans is, according to the Bundesbank 2018 the national average at 5.7 percent. For closed loans, it is 3.7 percent. That is: MRP loans are significantly more expensive than installment loans.

you have to pay the overdraft interest rate from an average of 8,37 per cent on every Euro you overdraw your account – until you have balanced your account completely.

That is to say: you should borrow money by overdraft, if you can pay it quickly, back ideally within a few weeks or a month. Otherwise, they threaten to fall due to the lack of regular, regular repayments in a very expensive long-term debt.

Who knows that he has to borrow over several months, the money is often with installment loans better than Overdraft facilities supported. The effective annual interest rate of installment loans is, according to the Bundesbank 2018 the national average of 5.7 percent. That was almost 3 percentage points less than the line of credit. Anyone who compares prior to the completion rates of credit offers through the use of credit portals, and the Internet is flush, pays even less. In the current year there are on average 3.7 percent. In sum, an installment loan is an average of almost 5 percentage points cheaper than an overdraft. He is also due to the regular periodic repayment is unpredictable. You know in advance, what are the costs and reduce on a monthly basis, your remaining debt. With FOCUS Online, Schufa-neutral credits

1 Vegetables without foil is bad: Without plastic, more... 2 The wage dispute in the case of Germanwings: UFO in... 3 Making the Most out of AC Repair Austin: When to Give... 4 This year, there is something Special: Aldi advertises... 5 Billion business: dm and Rewe offer new Service 6 Funds pull in pensions higher contributions - the... 7 New era in the shipping industry: drivers of a rude... 8 Uncomfortable prospects: millions of pensioners before... 9 If you as of today, this savings plan beach test,... 10 These shops are open on new year's eve: Where are... 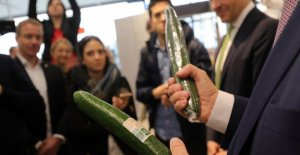 Vegetables without foil is bad: Without plastic, more...