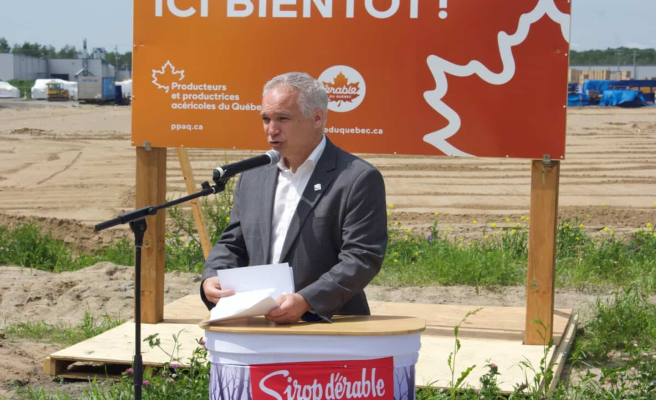 Les Producteurs et productrices acéricoles du Québec (PPAQ) has invested $14 million to build a third warehouse that will significantly increase the capacity of the global strategic maple syrup reserve. The first shovelful of soil was made on Thursday, in Plessisville, in Centre-du-Québec, on the site chosen for the realization of the project.

The Plessisville building will become the third warehouse for Maple Syrup Producers. It will be able to store up to 52 million pounds of syrup. The largest warehouse is located in Laurierville, a dozen kilometers to the north, with a capacity of 55 million pounds (maple syrup production is calculated in pounds). The other warehouse, in Saint-Antoine-de-Tilly, on the south bank of the river, in Lotbinière, can accommodate nearly 30 million pounds.

The investment is timely after a record harvest of 211 million pounds in Quebec this year.

“We had a lot of surplus for two years, explained the director of the PPAQ, Isabelle Lapointe, met during the first shovelful of earth. We rented three warehouses. We thought we had no choice but to act. To meet global demand, we must have a reserve of over 100 million pounds of syrup. It was necessary to have a third warehouse.”

The strategic reserve has existed since 2000. The objective of the producers was to be able to have a reserve to compensate for a more difficult year.

“There was a difficult period in 2008 and 2009, mentioned Luc Goulet, president of the PPAQ. We had emptied the inventory, due to the previous two years [...]. We have actuarial studies to project a sufficient inventory in the event of small harvests.”

Quebec accounts for an average of 72% of the world's maple syrup production and exports to some 60 countries, according to the PPAQ, an organization that represents 13,300 maple syrup producers. Demand has been on the rise for several years.

Thanks to this investment, the Maple Syrup Producers are confident that they will be able to continue to be a key player in a growing market.

“During the last two years, our growth was 20%, indicated Isabelle Lapointe. This year, we will be around 10% […]. We are a growing market.”

She added that government support will be needed regarding access to public lands where sugar maple is abundant. “Our growth will go through the addition of notches to allow us to develop markets with processors.”

Construction of the new 104,000 square foot building in Plessisville will be completed in March 2023.

Even if it worries some, the recent sale of Industries Bernard, one of the largest processors of maple syrup in Quebec, to the Irish group Valeo is seen by the maple sector as an opportunity to develop new markets.

Over the past few years, foreign players have been constantly acquiring Quebec processing companies. British Columbia shareholders Rogers Sugar and Belkorp own Lantic. The latter's subsidiary, The Maple Treat Corporation, acquired a major bottler in Lévis in 2017, Decacer for the sum of $40 million.

The sale of Industries Bernard to foreign interests is therefore part of a certain trend. The member for the riding of Arthabaska, Éric Lefebvre, is concerned about the situation.

“The fact of seeing Quebec industries passed into the hands of foreigners, it is always a little worrying, affirms the deputy of the Coalition avenir Québec (CAQ). On the other hand, it must be understood that you cannot move the maple trees. It is one of our riches and it will always be exploited in Quebec.”

“The maple industry is a Quebec flagship,” he adds. It is a great wealth in Quebec in the same way as hydroelectricity and drinking water.”

For his part, the president of the Producteurs et productrices acéricoles du Québec (PPAQ), Luc Goulet, sees in a good light for the industry the fact that a foreign company is proceeding with the acquisition of a major player in the sector such as Bernard Industries.

"A company like this that has just acquired Sirop Bernard, for us, it's still positive," says Luc Goulet. It will have tentacles in other foreign markets that we did not think we could explore. This increases our sales potential.”

According to the data presented by the PPAQ, Quebec produces nearly three-quarters of the maple syrup in the world. The product is exported to around 60 countries. 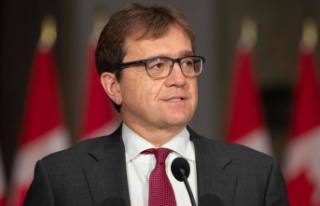