What 2023 has in store for us: lawsuits that will be on everyone's lips

Despite the chronic underfunding of justice, the courts will continue to hear cases in 2023, many of which will have an impact on Quebecers or will certainly be talked about.

Despite the chronic underfunding of justice, the courts will continue to hear cases in 2023, many of which will have an impact on Quebecers or will certainly be talked about. The Journal presents some of them to you.

A Laval resident will try this spring to convince the court that he is not guilty of having played a role in the kidnapping of the president of the Cora restaurant chain, Nicholas Tsouflidis, as well as of having tried to extort his mother, Cora .

Paul Zaidan, 53, faces a string of charges in connection with crimes that date back to March 2017, when the CEO of the breakfast chain was kidnapped in Laval.

The trial, supposed to take place before a jury, should last several weeks.

Two serious charges weigh on Marc-André Grenon, 47, namely a charge of premeditated murder in the case of Guylaine Potvin, found dead in his Jonquière apartment in April 2000, as well as a charge of attempted murder for a sordid assault which occurred in July 2000 in Sainte-Foy.

The file will be followed carefully since it is still not known how the Sûreté du Québec used the DNA evidence to put the grab on the man, the police force being content to speak of “innovative methods”.

No date has yet been set for the trial, with evidence expected to be released by the spring.

Ali Ngarukiye, a Montrealer, is accused of having attempted to kill a police officer after having disarmed him in January 2021, in the Parc-Extension district, in Montreal.

This crime had given rise to a major manhunt, which had resulted in the arrest by mistake of Mamadi Fara Camara, a laboratory technician and lecturer at the Polytechnic school without history.

His trial is expected to begin in the fall.

While in pre-trial detention, Ngarukiye allegedly killed a fellow inmate, earning him a murder charge.

Sentenced at the beginning of the year to life in prison without the possibility of parole for 13 years, the mother-in-law of the girl from Granby still hopes for a stay of proceedings, or a new trial, or finally a more lenient sentence.

The 39-year-old murderer should thus be heard at the Court of Appeal this year in order to present her arguments concerning the death of the little girl from Granby, who died in April 2019 at the age of 7, after a series of long abuses. which had shocked all of Quebec.

This sad affair had also led to the creation of the Youth Protection Commission.

Found guilty by a jury last November, ex-MP Harold LeBel will receive his sentence sometime in 2023 and face jail time, with the sexual assault count carrying a maximum sentence of 10 years in prison. .

The man who represented the voters of Rimouski for eight years under the banner of the Parti Québécois had been accused of sexual assault by a young woman who was a friend and whom he hosted at his home for two nights in the fall of 2017.

After joining her in her bed, which she had initially accepted “to buy peace” after having pushed the deputy away for the first time, LeBel allegedly touched her until she inserted a finger into her buttocks.

The deer saga in the Michel-Chartrand regional park in Longueuil could come to an end in April, with a hearing that will make it possible to decide on their fate.

It is that with the overpopulation of these animals, the City of Longueuil seeks to carry out a slaughter to control the number of deer in this park.

This was without counting the animal rights groups, with the colorful Me Anne-France Goldwater, who are multiplying the legal proceedings to save them.

This month, the Court of Appeal gave them a stay, ordering them to halt the project until the Superior Court makes a final decision.

After being found guilty in May 2022 and sentenced to life imprisonment a few weeks later, Halloween murderer Carl Girouard will return to the news in 2023 as the Court of Appeals is set to hear his motion.

According to the murderer's lawyer, Me Pierre Gagnon, Judge Richard Grenier erred in law by not including in his final instructions to the jury instructions regarding the police interrogation of his client, as well as by not not allowing the defense to cross-examine an expert at trial.

Three basketball coaches will be tried this year for sex crimes they allegedly committed while working at Saint-Laurent high school, in the borough of the same name in Montreal.

Charles-Xavier Boislard, 44, will stand trial in October for, among other things, exploiting a minor for two years, starting in 2008.

When the sexual abuse ended, her colleague of the same age, Daniel Lacasse, would then have come into the picture, sexually assaulting the minor for an equally long period.

His trial is scheduled for the fall.

A third coach, Robert Luu, 32, is for his part accused in connection with another victim, for facts which allegedly occurred between 2014 and 2017.

His preliminary hearing is scheduled for April.

The future of the Act respecting the secularism of the State will be known this year, with a highly anticipated decision from the Quebec Court of Appeal on its validity.

In total, 17 parties presented their arguments this fall in connection with Bill 21, which prohibits, among other things, people in a position of authority, including teachers, from wearing religious symbols during their shift.

Contested upon its adoption, the law had however been upheld in April 2021 by the Superior Court, due to the use by Quebec of the derogatory clause.

However, he had allowed English school boards and elected members of the National Assembly to wear religious symbols.

Adèle Sorella is accused of having killed her 8 and 9 year old girls in the family residence in Laval, on March 31, 2009, but more than 13 years later, she is still not fixed on her fate.

Sabrina and Amanda De Vito had been killed while their father, the mobster Giuseppe De Vito, was on the run.

He has since been murdered with cyanide in custody.

The waves of feminicides in Quebec since 2021 have brought a lot of defendants to court. And with the legal delays, it is only next year that many of them will be judged.

This should be the case for François Pelletier, 37, accused of the premeditated murder of his ex-girlfriend, Romane Bonnier, which occurred in the middle of the street on October 19, 2021, in front of passers-by on Le Plateau-Mont-Royal.

"She must die!" She must die! “, would have launched Pelletier to witnesses horrified by the scene.

The 24-year-old singer and actress had studied in the arts.

According to information obtained by Le Journal, Pelletier would have mental health problems.

This is the 17th victim of a spousal murder committed in 2021.

From his luxurious condo in L'Île-des-Sœurs, Alexandre Beaudry is said to have run a lucrative American network selling contraband anxiolytic tablets that would have earned him more than $ 54 million in cryptocurrency.

Under the alias "AlpraKing", among others, the 31-year-old accused would have sold 15 million fake Xanax, according to the American authorities who had been tracking him for years.

Beaudry was eventually betrayed by a pendant found in his home during a home invasion by thugs seeking the passwords to his cryptocurrency wallets.

It was the same pendant he used for promotional purposes.

The hearing on the US extradition request will be heard this year.

He risks up to 40 years in prison with our neighbors to the south.

The small group opposed to health measures became known during the pandemic with, among other things, its participation in the occupation of Ottawa at the beginning of the year.

But if Mario Roy, Steeve Charland and his friends from the Farfadaas defend themselves in court in January, it will be for the blocking of the Louis-Hyppolite-La Fontaine bridge-tunnel in March 2021.

“It was legal, it was a demonstration that we made that lasted five minutes, it is legal to demonstrate, nurses had done it in Quebec”, had chanted Mario Roy during a hearing at the court, letting it be known that the group would seek acquittal.

Accustomed to putting on a show during their visits to the court, the Farfadaas seem since to have calmed down with their last hearing which took place in peace.

Some of the members even seem to have distanced themselves from Steeve Charland and Karol Tardif, two leading figures in the group. 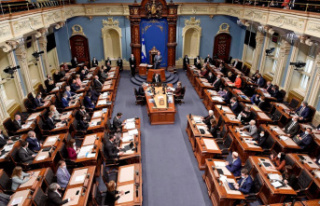