Macron, Scholz and Draghi on 'support' visit to Ukraine ahead of crucial EU decision

KYIV | Emmanuel Macron, Olaf Scholz and Mario Draghi promised Thursday to “unambiguously” support Ukraine in the face of Russian aggression, during an unprecedented visit to Kiyiv scheduled a few days before a decision by the European Union on the chances of this country to join the European bloc. 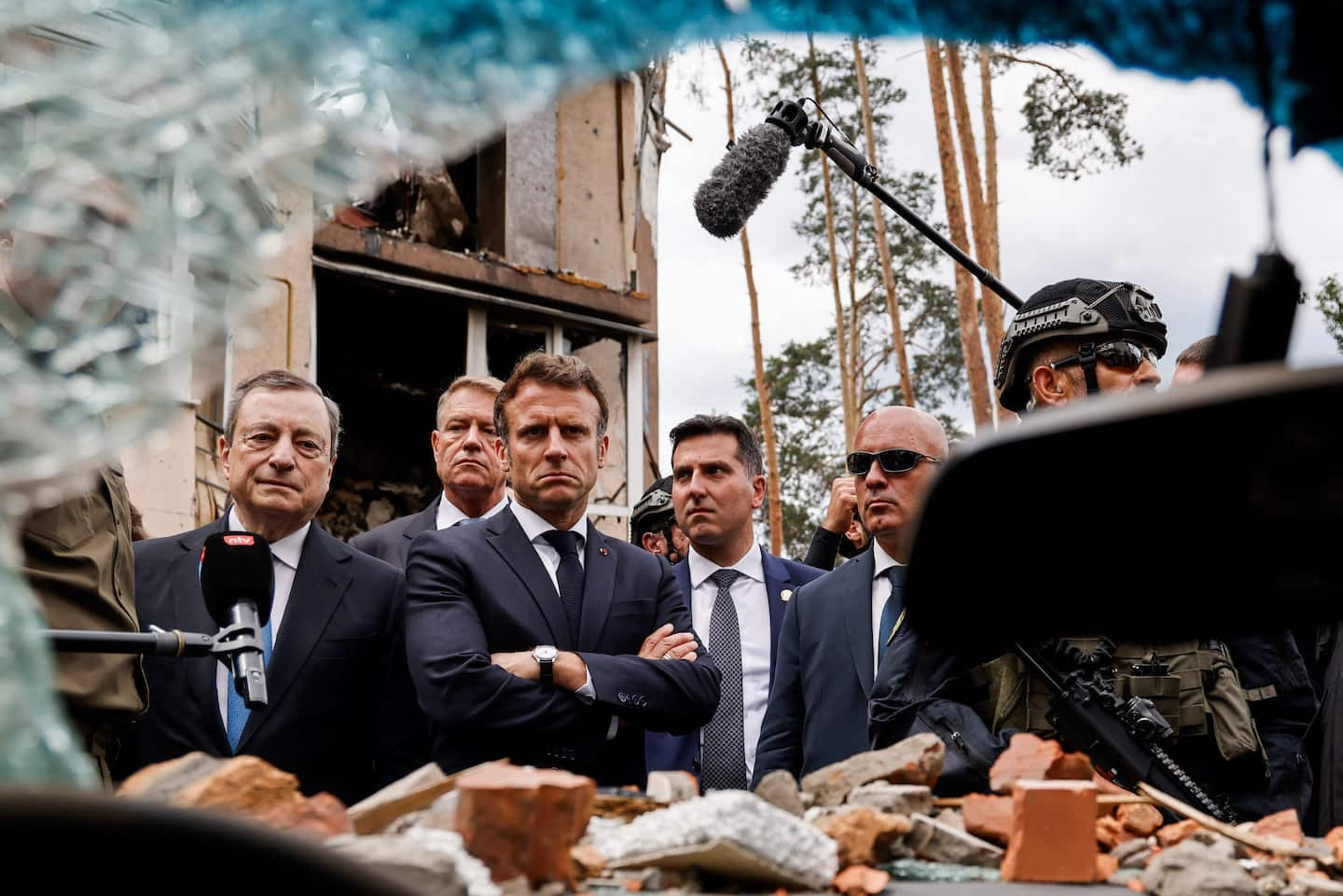 KYIV | Emmanuel Macron, Olaf Scholz and Mario Draghi promised Thursday to “unambiguously” support Ukraine in the face of Russian aggression, during an unprecedented visit to Kiyiv scheduled a few days before a decision by the European Union on the chances of this country to join the European bloc.

• To read also: Ukraine: around 10,000 civilians still present in Severodonetsk

Arrived at Kyiv station after nearly ten hours by train from south-eastern Poland, the French president, who holds the rotating presidency of the European Union until June 30, said that the leaders had come to address " a message of European unity” and “support” for Kyiv “both for the present and for the future”.

German Chancellor Olaf Scholz, criticized for the lack of German arms deliveries to Ukraine, has not made a formal statement for the moment. He indicated that the visit was aimed "to show our solidarity" and to "ensure that the aid we are organizing, financial, humanitarian, but also when it comes to arms, will continue (...) for as long as necessary for the fight for the independence of Ukraine", in an interview with the daily Bild granted during their journey by train.

By then visiting Irpin, one of the suburbs of Kyiv devastated at the start of the war by the failed Russian offensive on the capital, the French president defended himself from any "ambiguity" in his support for Kyiv, he who was widely criticized for asserting that Russia should not be "humiliated".

"Ukraine must be able to resist and win" against the Russian army, he said. “France has been alongside Ukraine since day one” (…) we are alongside the Ukrainians without ambiguity,” he said.

Like other European leaders who have come to Kyiv before them, the leaders wandered the streets of Irpin, stopping in front of buildings destroyed by the fighting or a charred car, asking questions of their guide, the Ukrainian Minister of Decentralization Oleksiï Chernychov.

The French president notably stopped in front of a drawing on a wall, accompanied by the message “Make Europe Not War” (“Make Europe, not war”).

"That's the right message," he commented. "It's very moving to see this."

"We will rebuild everything," promised Mario Draghi.

At the end of their visit, the French president praised the "heroism" of the Ukrainians, evoking "the stigmata of barbarism, "the first traces of what war crimes are."

The German Chancellor denounced "the brutality of the Russian war of aggression, which simply aims to destroy and conquer".

“Innocent civilians were hit, houses were destroyed. An entire city was destroyed despite having no military infrastructure,” he wrote on his Twitter account.

Hundreds of civilians were killed in the towns of Irpin, Boutcha and Borodianka, during the Russian occupation of this region in March. International investigations are underway to determine the culprits of these war crimes of which the Ukrainians accuse the Russian forces.

The four leaders then met Ukrainian President Volodymyr Zelensky at the presidential palace in central Kyiv before a joint press conference in the afternoon.

The Ukrainian capital has come back to life since the Russian withdrawal from the region, but is still occasionally hit by Russian fire. Warning sirens sound there frequently, as was the case shortly after the arrival of European leaders on Thursday.

The question of Ukraine's accession to the EU was to be at the heart of the discussions. Mr. Zelensky insists that his country, by defending “the values” of Europe in the face of Russian aggression, has won the right to join the European bloc, which the EU refused to consider before the start of the invasion Russian.

The Twenty-Seven must decide, during a summit on June 23-24, whether to grant Ukraine official status as a candidate for membership, the start of a negotiation process that could last for years.

The European Commission is due to make its recommendation known on Friday.

On Wednesday, from Romania, the French president had stressed the need to send "clear political signals" to the Ukrainians in an "unprecedented geopolitical situation".

Among the 27, the countries of Eastern Europe support this candidacy, but others such as Denmark or the Netherlands have expressed reservations. All decisions require unanimity.

Ukraine could obtain candidate status with conditions or a date for the opening of negotiations, according to some experts.

France says it is "open" to this candidacy, but proposes the creation of a European political community which would make it possible to anchor Ukraine more quickly in Europe, by associating it with concrete projects of defence, energy or infrastructure, without waiting for membership.

A proposal poorly received in Kyiv, which fears that it will postpone EU membership indefinitely.

While waiting to know the EU's decision, Chancellor Scholz confirmed that Mr. Zelensky had "accepted (his) invitation" to participate in the next G7 summit, from June 26 to 28, in Bavaria, then at the EU summit. which will take place in the wake of Madrid.

The Ukrainian president was also to reiterate to European leaders his request for the acceleration of heavy weapons deliveries.

“Ukraine must obtain everything necessary to achieve victory,” he insisted on Wednesday before Czech deputies.

The visit comes as Ukrainian forces struggle in Donbass, a region in eastern Ukraine partially controlled by pro-Russian separatists since 2014 and which Moscow has set itself the goal of full control.

The United States on Wednesday announced another $1 billion tranche of military aid to Ukraine, which includes additional artillery and shells.

"I want to express my gratitude for this support, it is particularly important for our defense in the Donbass", reacted Mr. Zelensky in his daily video message.

US Secretary of Defense Lloyd Austin called on his allies on Wednesday to "step up" arms deliveries to the Ukrainians.

“Ukraine is facing a pivotal moment on the battlefield,” he told a meeting in Brussels of the countries of the “contact group” created by the United States to help Ukraine militarily. . “We must therefore intensify our common commitment” and “redouble our efforts so that she can defend herself”, he added.

The fighting has been concentrated for several weeks on Severodonetsk and Lyssytchansk, two key neighboring cities for the control of Donbass, subjected to constant bombardments and whose almost all infrastructure - electricity, water, communications - no longer works.

"It's getting harder and harder every day, the Russians are bringing more and more weapons into the city and trying to attack from multiple directions," Severodonetsk mayor Oleksandr Striouk said on Thursday.

"The situation in Severodonetsk is complicated," admitted the head of the Ukrainian forces, Oleksiy Gromov.

The Ukrainian forces are notably entrenched in the large Azot chemical plant, emblematic of this city which before the war had some 100,000 inhabitants. More than 500 civilians are believed to have taken refuge inside, according to the mayor of Severodonetsk.

Moscow proposed on Tuesday a “humanitarian corridor” which would allow the evacuation of these civilians to territories controlled by the Russians, before accusing Kyiv on Wednesday of having “failed” the operation.

In total, some 10,000 civilians are still present in Severodonetsk, Serguiï Gaïdaï, the governor of the Lugansk region, said Thursday.

"The Russian army loses hundreds of fighters, but finds reserves and continues to destroy Severodonetsk," he said. But “our soldiers hold the defense”.

1 Cereals: United States calls on Russia to quickly... 2 Racist Buffalo killings: US government asked to say... 3 Ghislaine Maxwell asks for leniency from American... 4 Factory linked to baby milk shortage shut down again 5 The Russian giant Gazprom will only deliver 65% of... 6 “I have reached the end of my strength”: a first... 7 [PHOTOS] 50 years ago the Watergate scandal broke 8 She fled a massacre in Ukraine thanks to her dad 9 School delays that reach the "never seen" 10 Lack of motivation at school: "The teachers are... 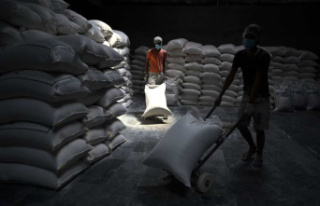